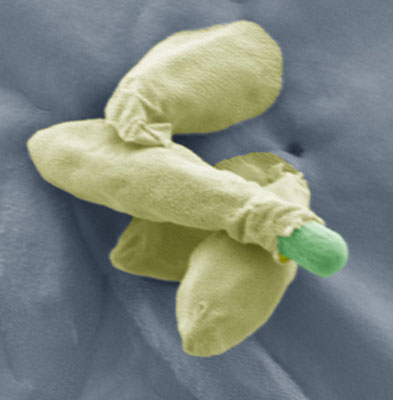 Researchers at the Institute of Food Research (IFR) have established how clostridia bacteria emerge from spores. This could help in our understanding of how these bacteria germinate and go on to produce the deadly toxin responsible for botulism (a lethal form of food poisoning) or cause food spoilage.

Clostridium botulinum bacteria produce the deadliest toxin known. Even tiny amounts of this toxin in food lead to botulism, which is fatal in 10% of cases. Clostridia bacteria survive in the environment as resilient, heat-resistant spores, so stringent safety measures are put in place in food processing. These ensure that botulism outbreaks are very rare, but to maintain food safety we need to understand as much as possible about how these bacteria survive and grow.

Scientists at IFR, which is strategically funded by the Biotechnology and Biological Sciences Research Council, have world-leading expertise in these bacteria, and have recently uncovered the genetic controls of spore germination in these bacteria. Now they have visualised the structural changes spores undergo during germination.

Dr Jason Brunt worked with microscopist Kathryn Cross to produce images of the stages spores go through during germination. They examined Clostridium sporogenes, a close relative of Clostridium botulinum that although less dangerous, can cause significant food spoilage problems.

Their images showed that the spores have an outer covering, called an exosporium, with an aperture at one end. Closer examination showed that this aperture aligned with a spot on the spore where it ruptures during germination, and that the newly formed cell emerges through these holes.

This suggests that the spores have polarity that aligns the structures correctly.

“We think that this polarity is genetically pre-determined in the dormant spore,” said Dr Jason Brunt. “Our long term aim is to formulate detailed strategies to interrupt these processes. This would be of great benefit to the food industry to help control these pathogenic and spoilage clostridia.”

This new research is published in the journal Food Microbiology.