Nestlé scientists have, for the first time, identified the molecular footprint for long life… 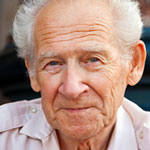 PREDICTING THE FUTURE: The research reveals how an individual may age.

Nestlé scientists have, for the first time, identified the molecular footprint for long life. PREDICTING THE FUTURE: The research reveals how an individual may age.

Swiss and Italian scientists at the Nestlé Research Center and the Nestlé Institute of Health Sciences compared samples from the blood and urine in volunteers in Italy ranging in age from 21 to 111 years old.

The research, presented at the 2013 International Congress of Nutrition in Granada, Spain, revealed that those in the group who had exceptional longevity – living to over 100 years of age – were characterised by complex changes in the levels of lipids in their body, to their metabolism of amino acids, and to the function of their gut.

Samples from those aged over 100 years also had levels of a distinct set of compounds remarkably similar to those of far younger people.

These changes, the scientists say, may act as physiological markers, predicting a longer life and a healthier old age.

“Discovering the metabolic phenotype of longevity for the first time is an exciting step in understanding the biological mechanisms of ageing,” said Dr Sebastiano Collino, the Nestlé scientist who led the study, which was carried out with Italy’s University of Bologna.

“This knowledge will help us to reveal the key processes necessary for the elderly to maintain good health and live longer.”

The study also showed a difference in the metabolic profile of the elderly individuals whose parents were centenarians, indicating a distinctive metabolic trait for ageing exists for the offspring of parents with unusual longevity.

Scientists looked at samples of the blood and urine of 396 volunteers from three generations of women and men living in three northern Italian cities – Florence, Bologna and Milan. The physical and cognitive health status of study volunteers was assessed using validated questionnaires.

A group of 21 younger volunteers were also studied, with a mean age of just over 30.

According to the research, published in the scientific journal PLOS One, centenarians showed a distinctive ability to acquire a balance between pro-inflammatory and anti-inflammatory forces, thus favouring longevity.

Specifically, substances in the centenarians’ blood and urine suggested that they may have a better anti-oxidative response and better cellular detoxification mechanisms.

“The difference is that long-lifers are somehow protected from the increasing inflammatory load associated with ageing-related chronic diseases,” Dr Collino explained.

This trial examined the blood and urine of a specially selected group, using metabolomics techniques – novel methods of looking at substances present in these fluids – to identify the biological processes that led to them.

“It is a bit like seeing the ripples of water in a lake after a stone has been thrown,” Dr Collino said. “You can’t see the stone but the ripples show you it has been there.”

The ultimate goal of the research will be to create new screening diagnostic tools that will provide a read-out of a person’s biological age, to identify an individual’s risk of developing age-related diseases.

Scientists also want to examine what impact the centenarians’ Mediterranean diet had on their exceptional readings.

In the future, Dr Collino suggests, further studies will be required to look at different populations with different genetic backgrounds. This will enable scientists to better understand the influence of nutrition and lifestyle on ageing and longer life.

Work is already underway, as part of the European Union-funded NU-AGE Project, to broaden the study to five different populations across Europe, to see if adopting the diet can actually change a person’s metabolic signature, leading to a healthier, happier old age.