The Neglected Pathogens – why foodborne parasites are relevant too

In the summer of 2018 2,299 laboratory-confirmed cases of cyclosporiasis in the US were reported to the Centers for Disease Control and Prevention, with at least 160 people hospitalised. Professor Lucy Robertson, Chair of a COST Action on foodborne parasites, along with Working Group leaders from the Action, explains why foodborne parasites are important – and why they remain the neglected pathogens, despite their significant impact. 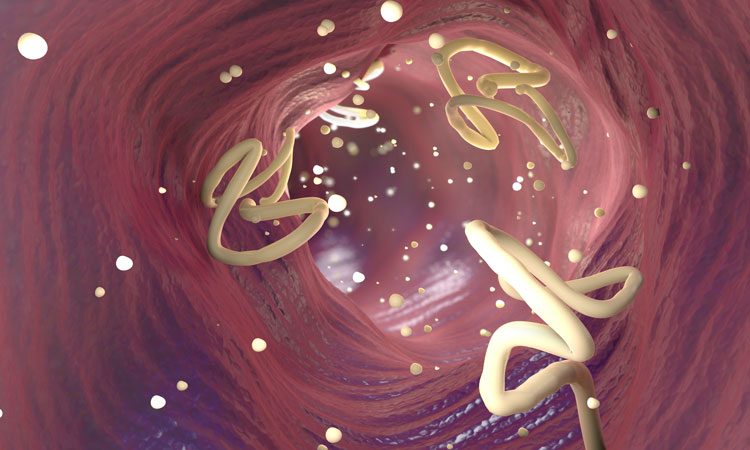 The increased incidence of cyclosporiasis in the US last year was not a one-off event. In 2017 there were 1,065 laboratory-confirmed cases in the US, with 384 being reported in 2016, and 546 reported in 2015. In 2014 there were 304 cases, while 2013 was another big year, with 631. Although the infection sources are often not identified, many cases have been associated with fresh produce, including imported coriander, pre-packaged vegetable trays, mixed salads from a well-known fast-food chain, basil, and various other fresh produce. This particular foodborne parasite (FBP) seems to return to US consumers on an annual basis; but why does this happen and how can we prevent it happening again?

Other foodborne parasites making a splash during 2018 In addition to cyclosporiasis bothering US-based consumers in 2018, other foodborne parasitic diseases affected consumer health last year. In Santa Maria, Brazil, an outbreak of toxoplasmosis occurred. Over 800 cases had been registered by October 2018, including 114 in pregnant women and three foetal deaths. Another parasite, Trichinella, caused several disease outbreaks in Argentina that same year; one in Pehuajó resulted in over 160 infections, one in Canals in Córdoba Province resulted in over 230 cases, and in Bahía Blanca over 100 infections were reported in September. Most outbreaks were due to consumption of sausages or salami.

Meanwhile, in spring 2018 the Japanese health ministry issued a warning about the parasite Anisakis in raw fish after several reports of infection in various areas of Japan, with acute epigastric pain being the main symptom. On a smaller scale, in Norway, sharing home-pressed apple juice with work colleagues in the autumn resulted in those colleagues reporting in sick one week later with violent diarrhoea due to infection with Cryptosporidium parvum.

This snapshot illustrates the diversity of both symptoms and food vehicles associated with parasites. It also leads us once again to question why parasites are the neglected group among foodborne pathogens, and what their relative importance is.

Some of these issues have previously been raised1 and problems specific to FBP that have been highlighted include their complexity, diagnosis and transmission attribution difficulties, and the lack of standard detection methods. We address some of these below, using examples of different parasites that also illustrate the importance and impact of these foodborne pathogens.

One problem with parasites is, perhaps, their enormous diversity. Some are protozoa: minute, single-celled organisms that, like bacteria, can only be seen with a microscope; others (such as Trichinella) are worms, but are also microscopic; while some (like Anisakis) are over 1cm long. Some are even bigger: tapeworms (cestodes) can be several metres in length (see Figure 1), although their transmission stages (the part consumed with food to pass on the infection) are generally smaller. Most important, however, is the fact that FBP lifecycles vary tremendously. Some FBP transfer relatively simply from infected host to infected host by transmission stages excreted in faeces contaminating food. Others, however, may go through one or more intermediate hosts, and the infectious stage may end up in the flesh of a fish or animal, which is later ingested. Thus, to understand how food may contain an infective parasite stage requires knowledge about complex lifecycles. Excellent lifecycle illustrations are available (see, for example, www.cdc.gov/dpdx/az.html) – but it is questionable how often these are consulted by those in the food industry. 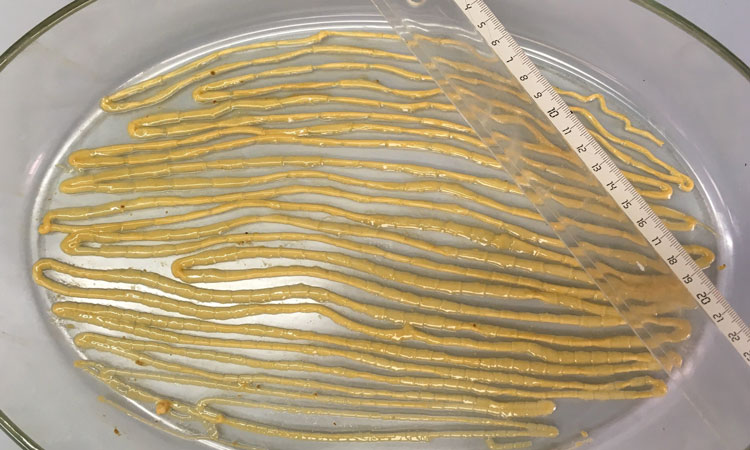 Confusingly, some parasites may have several possible routes of transmission to humans; different food types may be associated with transmission of different life stages of the same parasite, and the resulting symptoms may also differ. This is the case for some protozoan parasites, but is particularly important, although much neglected, for some tapeworms.

For example, the pork tapeworm, Taenia solium, may infect humans when undercooked pork from an infected pig is consumed; cysticerci (tapeworm larvae) in the pork may result in a tapeworm developing in the intestine of the person. Although this worm may be several metres long and cause abdominal symptoms, the infection is considered relatively mild. However, Taenia solium eggs excreted in the faeces of an infected person may contaminate fresh produce, and if these are consumed then the cysticerci may develop in the unfortunate end consumer. Cysticerci in the central nervous system can cause serious symptoms and the infection may even be fatal. Indeed, Taenia solium is considered to be the most significant FBP globally, causing around 28,000 deaths.2,3

As illustrated, being vegetarian will not prevent infection by FBP parasites.

Another example is Toxoplasma gondii. Calculations of disability adjusted life years (DALYs – a metric including both mortality and morbidity), showed that this foodborne pathogen has a high disease burden in the Netherlands,4 and elsewhere.5,6 As with other FBP, this burden is due to chronic, long-term sequelae. Transmission of Toxoplasma to humans can occur during various parasite stages, via such mediums as undercooked meat, fresh produce, or milk (see Figure 2). 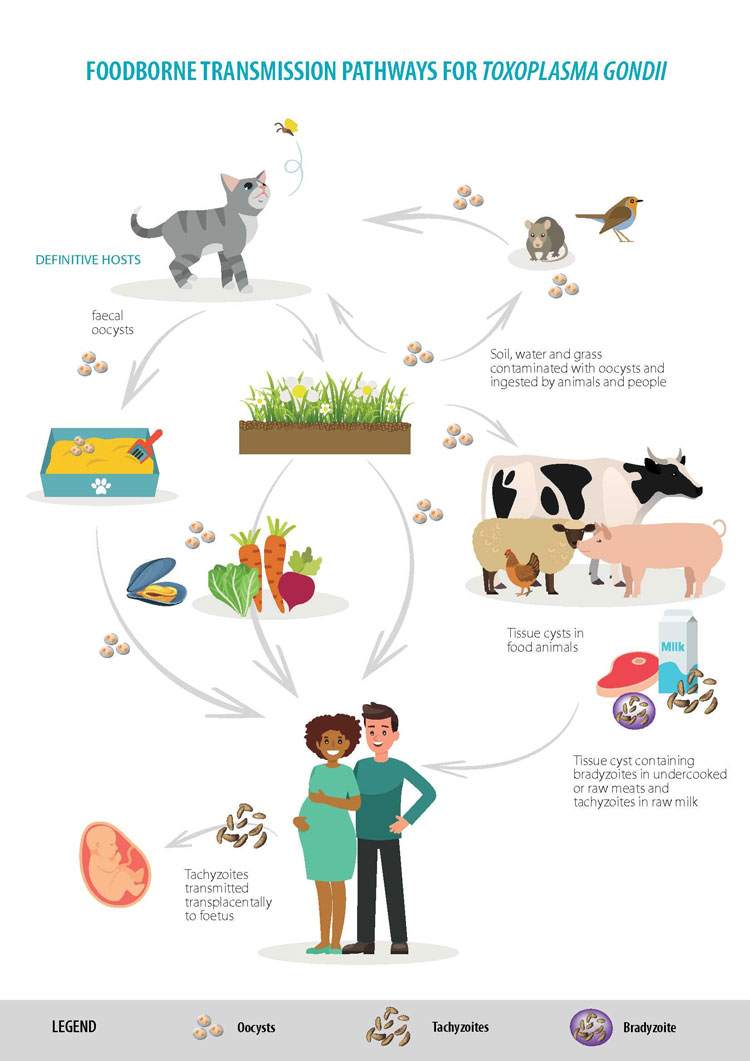 One reason why both consumers and food producers underestimate the likelihood and impact of FBP is due to the often-long period between ingestion of the parasite and onset of symptoms from the resultant infection. This means that pinpointing the meal from where the parasite originated – or, for some parasites, whether it was foodborne at all – is difficult.

It is simply hard to make the connection between something that was eaten a while ago and being ill now. Generally, when people blame something they ate for feeling unwell, they point to what they consumed the day before. However, for FBP the period between infection and symptoms can sometimes be several days, but more usually weeks or months, and even years (see Table).

Diagnosis may also be delayed, as the symptoms are often diverse and not pathognomonic, or because appropriate diagnostic tests are not requested. For example, opisthorchiasis, which is transmitted to people by ingestion of undercooked freshwater fish, is often asymptomatic, but may cause fever, abdominal pain, diarrhoea, fatigue, and diffuse myalgia. Furthermore, untreated chronic infection may result in the late development, after several years, of cholangiocarcinoma, a malignant cancer of the bile ducts with very poor prognosis.

Thus, early diagnosis and appropriate treatment are essential. However, several outbreaks of opisthorchiasis in Italy between 2007 and 2011 indicate that many physicians in Europe are not really aware of this disease. This may result in people living undiagnosed and at risk of developing cholangiocarcinoma.1

In essence, we can expect foodborne parasitic diseases to be underdiagnosed, thus skewing our understanding of the prevalence of these pathogens. Our current awareness of the situation is probably only the tip of the iceberg.

Foodborne parasites: we often don’t look for them in food

It may seem logical to look for FBP in food to ensure that it is safe for human consumption, and for some parasites (Trichinella, Taenia saginata cysticerci, Anisakis larvae) in some foods this is indeed the case – although the method sensitivity for some parasites can be low.

However, for other FBP, methods to detect parasites in food are either lacking entirely or are impractical and expensive. Legislation that demands that food be checked for FBP is lacking for many FBP. For example, although Toxoplasma is a very important FBP, meat is not examined for this parasite.7

Furthermore, even when outbreaks do occur, implicated produce may not be checked – often due to the prolonged period between infection, symptoms and diagnosis meaning that the implicated food has already been consumed or discarded. This complicates proper source attribution, outbreak investigation, and tracking the origins and routes of infection. For example, an outbreak of cryptosporidiosis in the UK in 2012 involving hundreds of cases was associated with consumption of pre-cut mixed salad leaves, yet suspect foods were not analysed.8 Several reasons were given for this – the main one being that, from the first outbreak, over three weeks were estimated to have elapsed since exposure and, given the short shelf-life of salad, none of the contaminated product was likely to be available for testing.

What have we learned and where are we going?

Returning to the 2018 outbreaks of cyclosporiasis in USA, one in a recurring tide, it is clear that we still have considerable progress to make regarding FBP and their control. For some foods, salting, drying, freezing, or heating will reduce parasite infectivity, but data are scarce compared to those available for bacteria, and the means to assess parasite viability it is not always obvious.9 For minimally-processed foods or fresh produce, control options are few. This complicates addressing FBP in HACCP-based food safety control systems. With growing trends for eating minimally-processed food products, animals raised outdoors, and organic farming systems, the likelihood of our food containing FBP will likely increase.

Fundamental questions remain about the epidemiology, survival and virulence of FBP. In addition, methods for detecting different parasites in various kinds of food, and removal or inactivation of FBP are not optimised. Answering these questions is fundamental, and initiatives to address them are appearing as knowledge gaps are recognised by relevant agencies. However, until both food suppliers and consumers become aware of FBP, finding answers to these questions will be a prolonged process.

This article was written as a collaboration within the framework of EURO-FBP, A European Network for Foodborne Parasites, COST Action FA1408. 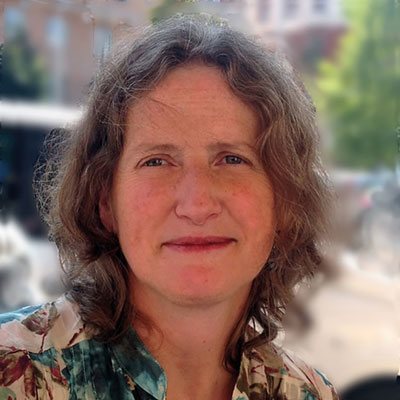