Low resolution or pulsed NMR (nuclear magnetic resonance) is an easy and fast way to determine solid fat content (SFC) of cocoa butter and other fats. It can also be used to observe the crystallisation process. However, in literature several ways of sample preparation and handling, especially for crystallisation kinetics measurement, are reported. These differences in preparation might not be critical when comparing results from one laboratory, but could be crucial when interlaboratory results are compared. The latter one is the case when it comes to quality control of raw materials. In this study different sample preparation and handling methods were used and their impact on the final results was investigated. 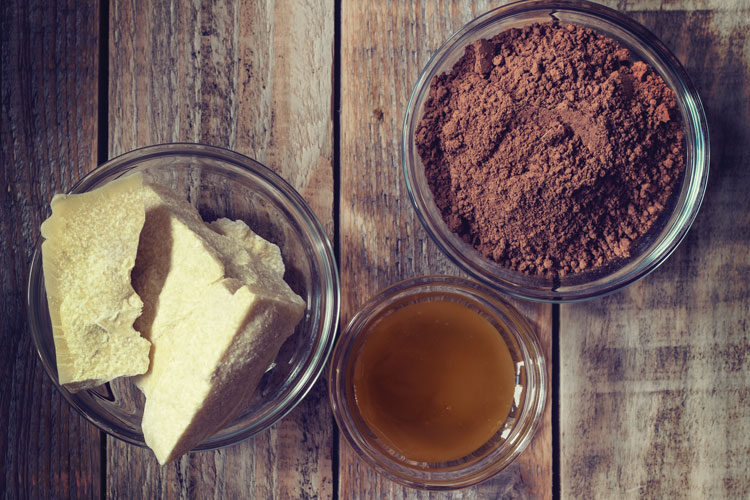 Today, in most cases NMR is used for standardised solid fat content (SFC) measurement.1,2 However, measuring crystallisation and melting processes of cocoa butter was already described in 1980.3 Ever since NMR was used to obtain crystallisation kinetics, but sample preparation and measuring conditions varied considerably.4 In this study we compare proceedings described in literature and hand out advice on best practice. To facilitate the evaluation of influencing factors, standardised SFC measurements were used. Each measurement consisted of three scans with 2s recycle delay. Temperature was recorded using a thermologer Almemo 8590-9. For temperature measurement inside the NMR probe head fibre optics were used.

A difference between the direct and the indirect method, which will be in focus at the end of the article, is the filling height of the samples. Samples are 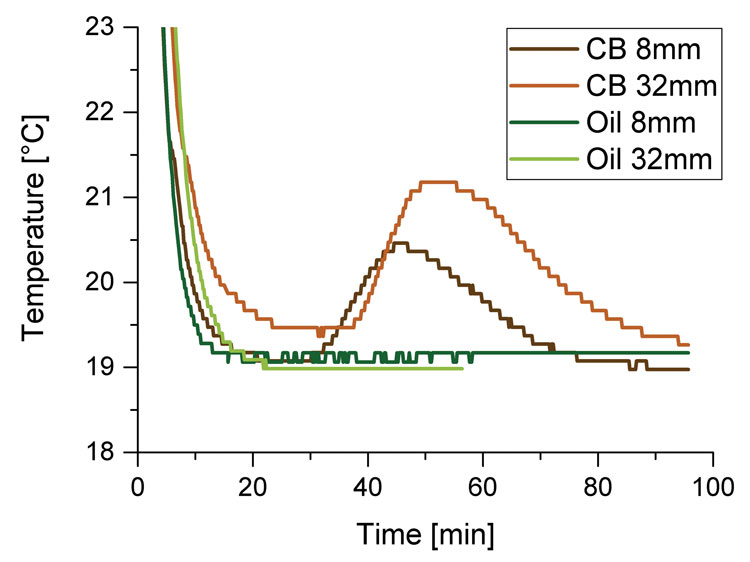 Figure 1: Temperature in cocoa butter (CB) and oil samples with a filling height of 8 and 32 mm in a NMR probe head tempered to 19 °C

Due to the lesser warming of the sample with smaller filling height, we suggest the indirect method for crystallisation kinetic measurements.

Before each measurement samples were fully melted and homogenised before placing the respective amount in an NMR tube. Prior to the measurement, the sample was heated to 70°C for 30min to erase thermal history. Afterwards crystallisation is initiated by putting the sample into an aluminum block, water bath or in the tempered NMR-probe head. In doing so, the sample might be rocked. Rocking might disturb the arrangement of the molecules or it might initiate the crystallisation especially in pure cocoa butter samples. Keeping your sample steady is recommended.

The temperature of the probe-head, which is the measuring temperature, is often chosen in accordance to DSC measurements. However, it could also 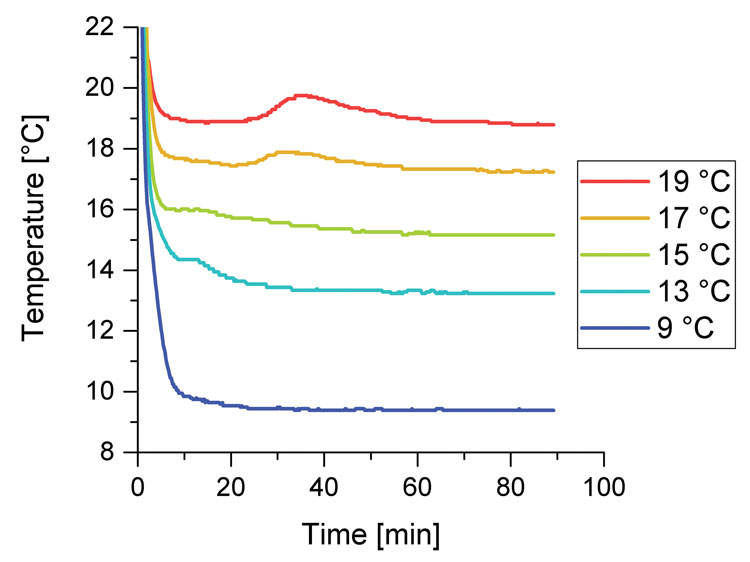 be in the range of MultiTherm or Shukoff measurements, which would be at 17.6°C and 0°C or 8°C, respectively.7,8 Therefore the temperature progression in an NMR tube with cocoa butter at a filling height of 8mm was measured for different given temperatures of an aluminium block in a water bath, shown in Figure 2. 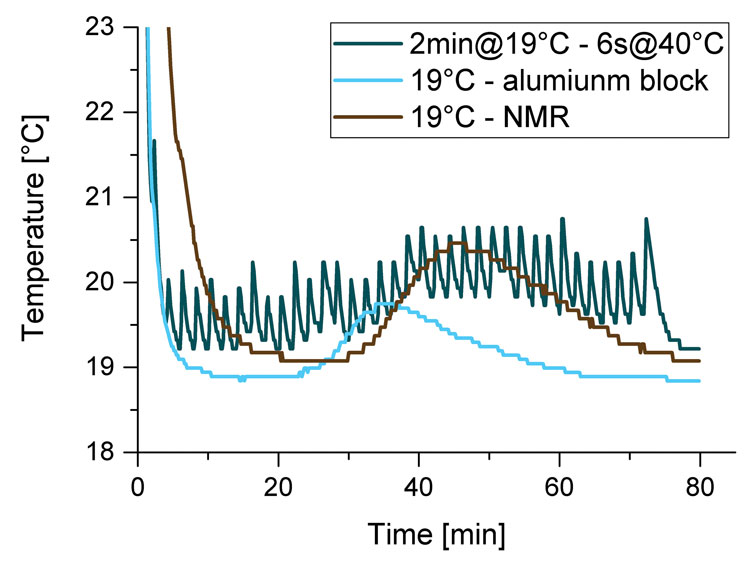 improved heat transfer in water compared to air. However, care has to be taken when wiping off the water.9 To investigate if the remaining water influences the measurement 20 samples were prepared as described for standardised SFC measurement.5 The samples were divided in two groups in which the last tempering step of 1h at 20°C varied. For one group the last step was water free in an aluminium block tempered in a water bath. The second group was placed directly in the water bath and the water was wiped off the tubes just before the measurement.

A t-test showed, that the two groups are statistically significant different with a=0.05 and P£0,001.

Wiping off the water from a sample tempered indirectly in a water bath is individually different and depends on the operator. Therefore tempering in an external aluminium block or directly in the NMR probe-head is recommended. External tempering allows performing several measurements at the same time by hand or by using an auto sampler. However, when the sample is moved by hand, rocking and shaking should be avoided. Internal tempering can be used with automated measurement, but for only one sample at a time.

Probe-head tempering during the measurement

During measurements with external tempering, the NMR probe-head can optionally be tempered to the crystallising temperature too. The use of an external tempering unit without tempering the probe head was simulated by manually putting a molten sample (cocoa butter with filling height of 8mm) in an aluminium block cooled to 19°C for 2min followed by 6s in an aluminium block at 40°C. This procedure was repeated until the latent heat release during crystallisation could no longer be observed. The temperature progression of a cocoa butter sample kept in the aluminium block at 19°C and a sample with simulated measurement for 6s at 40°C is shown in .

Choosing your method: direct vs. indirect

For the direct method5 only one measurement is needed. The ratio of the signal in the beginning, including the solid and the liquid phase, and the 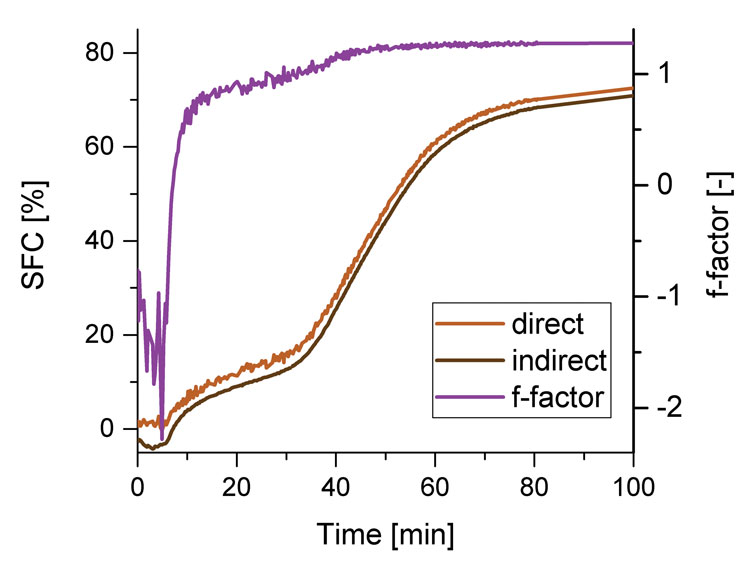 second signal, which includes the signal of the liquid phase is used to calculate the SFC. Due to the dead time, the first signal of the solid and liquid phase cannot be detected directly after the high frequency impulse. An extrapolation factor f is used to calculate the signal at time t=0. Therefore the direct method results in an approximated value because of the f-factor for several reasons. First, a linear extrapolation is assumed to calculate the signal at t=0, but the signal shows a non-linear decrease. Additionally, the f–factor depends on the molecular mobility, e.g. temperature, polymorphism and crystal size.10,11 Additionally its temperature dependency is also due to the dilatation of the liquid phase. Since the f-factor depends on the polymorphic state, it changes during the crystallisation process, which can be seen in Figure 4. From the recorded signals, the direct SFC, the indirect SFC and the f-factor were calculated as described in.5,6

Another influencing value is the solid phase in samples with non-fat solids. Therefore two measurements of a sample, one at the solidified and one at melted state are necessary to distinguish between protons in the crystallised fat and those in the solid non-fat material of chocolate (non-fat cocoa solids, sugar). Ziegleder et al. (1998) described this problem and developed a correction function to calculate the SFC of chocolate.12

The authors thank Christian Schormair for conducting the lab work. This project of precompetitive research was supported by the Chocolate Group of the Industrial Association of Food Technology and Packaging e.V. (IVLV) Freising.