What is happening to Juicero? A look behind Silicon Valley’s darling juice phenomenon

Juicero, hailed by celebrities from Dr. Oz to Gwyneth Paltrow, has seen a lot in under a year. New Food takes a look behind the Silicon Valley darling… 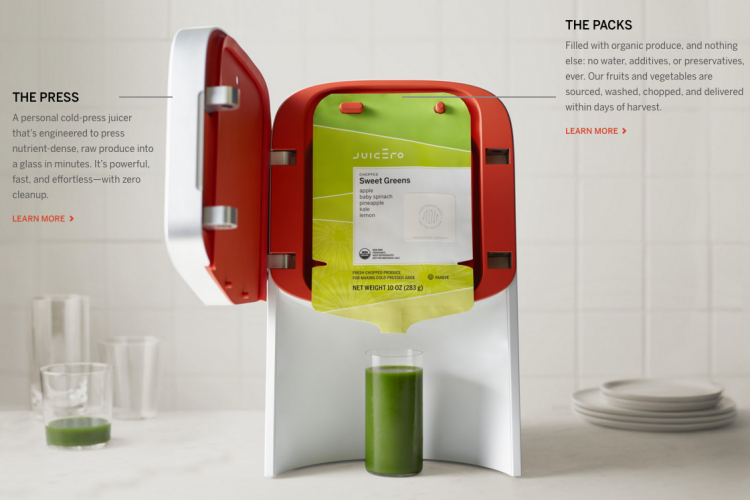 After around three years behind a curtain during which founder Doug Evans worked hard building resources and raising an army of capital close to $100 million, the startup Juicero finally launched in March 2016.

With the war on sugar fully declared by the FDA as well as across Europe – the UK considering the implementation of a sugar tax amongst other measures – Juicero represents a tech-savvy reaction to the health trend.

So what is Juicero?

As the Business Insider reports, Juicero is “an Internet-connected juicer, priced at an eye-watering $700, that would only work with specialised, I.V.-like bags of pulverised fruits and vegetables.”

No preparation, mess, or cleanup necessary, the Juicero USP seems pretty strong. You simply slide in a purchasable, pre-prepared pouch, press a button, and out pours your juice.

If you think about it, it’s a little like Nespresso for juice, or as it was known at the time of its release it was coined by the press as the “Keurig for juice,” and borrows from the Apple ‘exclusivity’ business model in the idea that only Juicero pouches work in Juicero machines – creating a theoretical dominance of software and hardware if it were to take over the world…

Watch the video below to see how Juicero works:

The idea behind Juicero quickly gained traction in Silicon Valley attracting $120 million in investment from some of the tech world’s most influential and powerful venture capital companies: Kleiner Perkins and Google Ventures to name a few.

Its philosophy is tightly linked to founder Doug Evans. He could not believe that the average US citizen consumed less than half the daily amount of fruits and vegetables recommended by the USDA. This led him onto the assertion that many regard it as physically hard and inconvenient to make and ingest five portions worth of fruit and vegetables a day.

Mr Evans a long-time vegan, knew that drinking fresh, cold-pressed 100% juice is a convenient way to infuse a daily diet with more fresh fruits and vegetables.

Juicero also appears extremely modern, boasting the chic design of an Apple product. That’s no surprise as Apple design pair Jony Ive and Yves Béhar were behind much of the design philosophy.

The juice start-up is no stranger to superlative review, enjoying almost unanimous agreement that its taste is unrivalled in terms of reconciling the age-old issue of making healthier produce taste as satisfying as sugary, salty and fat-filled goods.

“This product, when you drink it, it’s alive,” Stuart Peterson, a partner at Artis Ventures, tells Business Insider.

“When you have Keurig coffee, I guess it’s a good cup but it doesn’t blow your mind. This blows your mind because the fruits and vegetables are in a natural state. It’s just a beautiful thing.”

However, the ‘reality’ of its original $700 price tag began to hit home and in October, Doug Evans was replaced by a former Coca-Cola president and Juicero began to market itself more towards retailers and restaurant chains (Le Pain Quotidien) as opposed to the B2C approach Mr Evans initially envisaged.

Consequently the cost of a Juicero luxury juicer has plummeted to $399 this week and the packets of fruit and vegetables are expected to drop from their current $7 per unit figure according to Vanity Fair.

In essence, Juicero is undergoing a drastic redefinition of its business strategy and no one really seems to know what it currently represents. Is Juicero a high-end, expensive but revolutionary means of radically improving the average person’s diet, or a Silicon Valley baby that prematurely found its way out of the bubble and has lost sight of what it originally wanted to be?

On the one hand, current CEO Jeff Dunn says he “could see a Juicero in a McDonald’s in five years,” while Juicero’s founder Doug Evans questioned in an interview last year with Gizmodo whether Juicero was ever meant to leave Silicon Valley.

“This is our first entry into the market, this is a small-scale unit,” he stated comparing Juicero to the Tesla Roadster. What cannot be denied is that the health trend is perhaps the defining trend at present in the food and beverage industry and Juicero’s coupling of technology, sleek design and convenience with nutritional value surely will sell itself.

The problem is, while convenient in theory, in price, Juicero fundamentally alienates those who currently truly need the ‘convenience’ of healthy food intake: The masses; The average citizen; the man or woman who works a 40 hour week and doesn’t have the time or money to autonomously prepare on a daily basis a smoothie are those who truly need the machine.

The start-up, though extremely well-supported from an investor’s perspective, doesn’t seem to know what it should be. Though currently embarking on what seems like an ambitious attempt on the mass market, Juicero still remains exceptionally expensive for the average individual without having a significant market presence outside of the tech world.

It therefore could be argued that the company, for all its noble sentiment, still remains unable to solve a very real issue: that of nutrition and a balanced diet in a world in which obesity, sugar-intake and malnutrition remain increasingly serious issues.

That said, the jury is still out and Juicero’s financial momentum, if well-directed, could well make waves both in the US and throughout in the world.

Perhaps all it needs is more time and a ripe shake-up.

One response to “What is happening to Juicero? A look behind Silicon Valley’s darling juice phenomenon”