Will Brexit spell the end for Cornish Clotted Cream?

Posted: 20 May 2016 | Lewis Crofts, Chief Correspondent at mLex | No comments yet

Geographic food names are protected under EU law, but if the UK leaves the bloc, could Chinese dairies flood European markets with knockoff Cornish Clotted Cream or Staffordshire cheese? 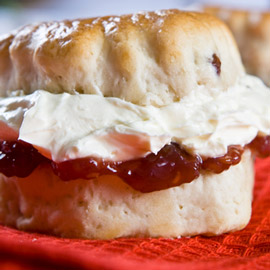 Geographic food names are protected under EU law, but if the UK leaves the bloc, could Chinese dairies flood European markets with knockoff Cornish Clotted Cream or Staffordshire cheese? As the EU referendum debate reaches new lows, campaigners are searching for arguments that strike fear — over staying or leaving — into the hearts of voters. The fate of typical British foods such as Traditional Welsh Cider or Stornoway Black Pudding is one such topic.

Agribusinesses outside of Europe have become skilled in producing vast amounts of potatoes, corn, beef and sugar at a lower price than most EU farmers. So, one of Brussels’ cornerstone policies has been to support the continent’s farmers in producing traditional, high value foods.

This meant establishing a programme to protect regional specialities — such as Italian hams, French cheeses and Czech beers — and ensure that foreign producers can’t sell Chablis, Queso Manchego or Prosciutto di Parma if they’ve got no link to the corresponding regions.

These “geographical indications” come in various forms. In short, they designate and protect the origin of a product in a particular region, and they feature heavily in EU trade deals. The bloc insists that trading partners sign up to the protections as part of wider agreements on imports and exports.

Indeed, the EU has deals with Albania, Chile, Korea, South Africa and Switzerland — to name but a few — that include such provisions. Brussels believes the agreements help “build a global consensus for the protection of local and regional speciality products.”

It’s a prominent way of Europe shielding its heritage and its farmers. But what would happen to Britain’s farmers if the country votes on June 23 to leave the EU?

In 2010, the UK had more than 30 protected products, worth around a billion euros in sales, European Commission statistics show. But what would be the fate of Conwy Mussels and Vale of Evesham Asparagus after a “Brexit” vote?

UK premier David Cameron stoked the debate on April 21 by claiming in an editorial published by a local newspaper that “if we leave the EU and our farmers have to operate [only] under World Trade Organization rules, things would be very different.”

After a Brexit, the UK could negotiate a trade deal with the remaining EU members. Such a deal would most likely contain provisions on the continued recognition of each others’ protected names.

“UK businesses will want to preserve their rights in the UK and, equally, producers from other European countries will want to maintain those rights they have hitherto had in the UK,” Rowan Freeland, a partner at Simmons & Simmons law firm in London, told MLex.

The UK would then have to insist its names were protected when negotiating new deals with other trading blocks. Anti­Brexit campaigners have said the UK would struggle to negotiate beneficial deals on its own — without the clout of 27 other countries alongside it.

When the EU negotiated its trade deal with South Africa, one academic said European negotiators were forceful — and successful — in ensuring protection for their list of designated foodstuffs.

Would the UK be able to extract the same protection on its own when fighting for West Country Farmhouse Cheddar? Or would it get better terms lining up alongside Grana Padano, Roquefort and Comté?

Protected names aren’t guaranteed in bilateral trade deals struck by the EU; they’re negotiated along with all other elements in an accord. The most recent trade deal struck by the EU, with Canada, includes no protected British goods and the EU­Korea agreement reached in 2011 includes just one British product — Scotch whisky.

Without the French, Italians and Greeks pushing for numerous cheeses to be protected, the UK’s goods could be more easily safeguarded in its own trade deals, as it won’t have to fight for elbow room.

But the concept of geographical indications isn’t popular with countries such as the US and Japan, and the EU — despite its huge negotiating weight — is struggling to persuade trade partners to include them in trade deals.

This begs the question: if the EU is having a tough time doing it, what hope does the UK have?

In a submission late last year to the UK parliament, Scotland’s distilleries praised the value of shielding their brand in international trade agreements.

“It is an advantage to have the “Scotch whisky” geographical indication protected at EU level, enforced across the single market, and incorporated into EU trade deals,” the Scotch Whisky Association wrote.

The legal landscape will be in turmoil if the UK leaves the union, but it may take time to see any substantive changes.

“The rights are granted under EU law, and if the UK leaves the EU, that law will no longer be applicable in the UK,” Freeland said. “Right holders will still want to have their rights, and I expect there will be a process for converting an EU geographical indication into a UK ­law geographical indication, which is respected in the UK.”

It could be up to the UK’s Intellectual Property Office or a government ministry to take over management of applications and a register of the names.

But being outside the EU doesn’t stop producers from gaining European protection. The programme is open to non­EU products — such as Mexican tequila — as well. Yet, countries may lose the ability to oversee and influence the approval procedure that takes place in the EU’s institutional structures.

The Scotch Whisky Association said the UK could lose influence on European drafting of related legislation, and therefore put protected foods at risk.

“Rules on labeling might be set in ways that suited other [geographical indications] or spirit drinks but not Scotch whisky, whose success has depended on the most rigorous possible protection of the category,” the lobby wrote.

So, will Chinese producers flood Europe with Traditional Chinese Clotted Cream, squeezing out the Cornish masters?

Clotted cream did not make it onto a list of 10 European products the Chinese agreed to protect as part of a reciprocal deal in 2011 with the EU. In return, Europe said it would acknowledge 10 Chinese foods, including teas and apples.

But the UK did see Stilton cheeses, Scottish farmed salmon and West Country Farmhouse Cheddar incorporated into that deal with China.

On the fringes of the EU, the UK could be expected to secure its own agreement with the remaining countries of the bloc. And further afield, it would have to try its hardest to include the protections in new trade deals yet to be struck.

Globally, there are also international rules on geographic indications, governed by the World Intellectual Property Organization, that provide some limited succour.

It would be wrong for Cornish clotters — or David Cameron — to predict ‘farmageddon’ if the UK votes for Brexit next month. But farmers would be turning their backs on a system that works well and makes the most of the combined negotiating power of 28 countries and their world-famous foods.