Ingredient replacement in low fat mayonnaise: Going with the flow

We discuss the microstructure and some rheological aspects of commercial mayonnaises, ranging from a traditional mayonnaise to lower fat content mayonnaises and finally a low cost supermarket own brand mayonnaise… 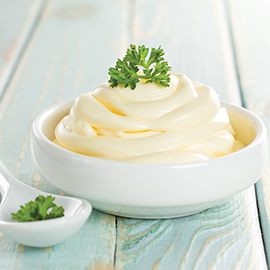 Mayonnaise is a common and popular condiment, consumer acceptance of which, like most food products is primarily driven by flavour. However, other criteria including texture, ease of dispensing and spreadability are important. The product needs to flow out of the bottle with relative ease yet maintain its structure once dispensed. This functionality is determined by the rheological properties of the product, which are due to the interactions between ingredients at a macromolecular level and by the microstructure of the product.

Mayonnaise is an emulsion and consists primarily of water and a dispersed oil phase, traditionally consisting of olive oil, though other vegetable oils are also very common. As such, mayonnaise can be classed as a concentrated emulsion or a high internal phase emulsion and often as a soft solid. The oil droplets are usually stabilised by egg yolk derived amphiphiles, namely phospholipids such as lecithin. In particular, lecithin is a highly effective stabiliser, which prevents the emulsion from phase separating or splitting.

Global trends continue to see promotion of healthy lifestyles through regular exercise, balanced diet and avoidance of high calorie and fat content foods. Therefore, the drive towards ‘light’ food products has become a common theme with all food manufacturers providing products to an increasingly aware consumer population. Furthermore, the desire for higher profit margins stimulates efforts to reformulate food products using cheaper ingredients, which nonetheless maintain all the sensory characteristics of the original formula. To address these trends, mayonnaise recipes have moved to products with lower fat content. To maintain the texture and rheological properties of the ‘light’ products, water soluble polymers such as bean and bacterial derived guar and xanthan gum, respectively, are employed. When dissolved in water these polymers hydrate and form networks. The result is a high viscosity product at low concentrations of additive. The networks these ingredients form also share similar rheological characteristics to many foods, such as yield stress and shear thinning behaviour. As such, they are excellent alternatives to more expensive standard ingredients. In changing the ingredients, the formulator can dramatically change the microstructure of the product, but it has to exhibit similar sensorial attributes.

Confocal microscopy reveals the structural difference between samples. Figure 1 shows that traditional mayonnaise consists predominantly of closely packed discreet oil droplets in line with the reported ~80% oil content on the label. The light mayonnaise images show far fewer oil droplets, highlighting the presence of organic fibres and autofluorescent cream particles. The very light mayonnaise shows a low number of large particles, and finally the budget own brand mayonnaise possesses a large number of small oil drops and surprisingly, continuity and connectivity of the droplets, presumably afforded by the presence of natural polymer networks.

Microscopy is an excellent initial tool for the differentiation of these products. The combination of this technique with rheology can provide powerful insights into predicting sensory perception1.

Oscillatory rheology tests are performed to probe microstructure mechanical properties. These tests relay information on the rigidity or fluidity of the microstructure. They do so in a non-destructive manner within the linear viscoelastic region (LVR). This lends itself to production troubleshooting, quality control and as a reference test in formula optimisation. The LVR is identified in Figure 2 and Figure 3 as the range of stresses within which the G’ (elastic modulus) shows little to no dependence (ideally) on the stresses and therefore is nearly parallel to the stress on the x-axis.

For these products, oscillatory stress sweeps were carried out using a 1Hz frequency and a stress range of 1-1,000Pa. From the measurements it became evident that all of the mayonnaises had very similar elastic and viscous moduli, which was likely engineered by the formulators. In Figure 2, the traditional mayonnaise had the highest elastic modulus, which suggests it had a slightly stronger structure than the rest of the samples. The budget own brand and light mayonnaise had very similar elastic modulus values, which was commensurate with the similar oil content in their composition. The very light mayonnaise had very low amounts of dispersed oil and had the lowest elastic modulus.

Differences between the mayonnaise recipes were more evident in the non-linear region which is observed at the stresses at which the G’ starts showing strong dependence on stress and a pronounced decreasing trend (Figure 2 and Figure 3). The crossover of G’ and G’’ (i.e. where G’=G’’) in oscillatory tests typically signifies the point at which the material adopts a more liquid–like behaviour and hence is reminiscent of the yield stress as a concept.

Interestingly, the stress at which the crossover occurred for the budget own brand mayonnaise was ~2.6 times larger (Table 1) than the traditional mayonnaise, despite the latter having approximately three times more oil content. The mechanical behaviour of the budget own brand mayonnaise can be attributed to the presence of the polymer thickeners, which are able to deform significantly prior to flowing. Traditional mayonnaise does not contain any such polymers and is reliant solely on the packing of the oil drops to maintain its structure. These oil drops will likely not deform themselves because they are coated by the strong stabiliser (lecithin), which affords the oil droplet interface with high rigidity.

Thixotropy is a property of soft materials in which the internal structure can be broken down by application of stress, but will regenerate with time once the applied stress ceases. It is a property that almost all dispersed systems exhibit, from emulsions to pastes, paints and drilling fluids. A frequently employed measure of thixotropy is the difference in the areas formed by the up curve (low to high shear rate) and down curve (high to low shear rate) in a flow curve (Figure 4).

Table 2 shows the thixotropic areas from the flow curves for each of the four mayonnaises tested. The lowest thixotropic area (the traditional mayonnaise) had the most stable structure, which means it will regain its intended optimal structure upon dispensing, thereby meeting the consumer expectation. The budget own brand mayonnaise had the largest thixotropic loop so it will require more time to reconstitute itself before it reaches the intended texture again and therefore have the desired or intended consumer textural response.

As expected of emulsions and polymer solutions of this type, the samples all showed a strong shear thinning character, (Figure 52). The budget own brand mayonnaise however had the highest low shear viscosity followed by the light, very light and traditional mayonnaises. Low shear viscosity can be related to ease of dispensing. In other words, the budget own brand mayonnaise would require more force to squeeze out of the bottle than the rest. Similarly, the traditional mayonnaise would require less force to pump through production.

As a relatively quick and easy assessment of the degree of structure regeneration, the viscosities of the mayonnaises were compared at a predetermined low shear rate. Table 3 reports the percentage decrease in viscosity at 1s-1 of the up and down curves. The budget own brand mayonnaise showed the largest reduction in viscosity followed by the traditional, very light and light, in broad agreement with the size of the thixotropic areas reported in Table 2.

Microscopy highlighted that all four commercial mayonnaises exhibited very different microstructures. The impact of these microstructures was evaluated via rheological testing, showing differences in flow behaviour and solid-liquid transitions. The traditional mayonnaise showed that ingredient replacement (as advanced as it is), may still be discerned using the techniques described herein.

Food products bear the most scrutiny by consumers as their acceptance is determined by the highly sensitive olfactory and haptic organs and is further influenced by personal preference. The formulator has to contend with these hardwired responses in delivering well received formulas. Rheology alone, or in combination with microscopy, can be used as a tool to provide insights to help guide formulators in their choice of ingredients. Therefore, these technologies facilitate formulators in the design of products when using alternate ingredients and enable assessment of the impact this may have.

Dr Bogdan Dobraszczyk is a Senior Scientist in the Physical Sciences group at RSSL, specialising in the areas of texture and rheology. He holds a PhD in Materials Engineering from the University of Bath. He can be contacted at: [email protected]

John Cawkwell is a Scientist in the Physical Sciences group at RSSL, specialising in rheology. He holds a BSc in Physics from the University of Sheffield. He can be contacted at: [email protected].