One of the constant headaches of the food industry is the issue of contamination. This may be as the result of contaminants in the environment or deliberate tampering of food products; the underhand practice of food adulteration is a threat wherever costs can be cut. To identify such deliberate contamination of food products requires analytical techniques which are able to screen not only for what might be used to adulterate a product but also for the unexpected… 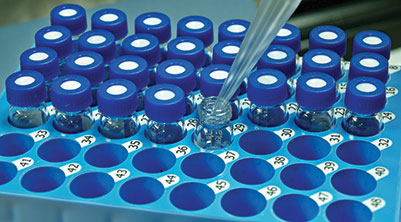 Where does mass spectrometry come in?

Mass spectrometry is a versatile detection approach which can be used to produce qualitative as well as quantitative data. This is particularly useful when screening for unknown compounds since the additional data provided by the mass spectra can provide clues to the structure and possible identity of the compound causing the response. It is both a selective and sensitive technique. The range of selectivity and sensitivity varies according to the type of mass spectrometer used. Mass spectrometers vary according to the type of source used (which determines what ionisation process is used) and the mass analyser (which determines how ions formed in the source are separated).

A TOF mass spectrometer such as the one used at Leatherhead Food Research is a useful tool to screen for differences between samples. Sample preparation can be minimised since full scan data can be acquired over a range of masses without sacrificing sensitivity. Much interference can be screened out by selecting accurate masses of interest.

To obtain good spectra for compound identification, some separation of compounds present in the sample is required. This is commonly achieved by gas chromatography though this requires compounds to be sufficiently volatile. This is because the sample needs to be vapourised into the gas phase for the carrier gas to carry it through the GC column where separation of the various compounds present takes place. There are, however, an increasing number of applications using liquid chromatography, as will be later discussed.

By building up databases of sample profiles and the use of statistical methods, it is possible to take account of unavoidable variation in the samples – various food products ranging from fruit2 to tea3 will have unique aroma profiles which may be attributed to factors such as the season in which it is grown, geographical location, and any associated processing that might be required. From the profiles of authentic samples, it may be possible to identify characteristic markers which can be used to identify if adulteration has occurred. If unique marker compounds are hard to identify, an alternative would be to use patterns observed in the levels of compounds present. Application examples include the adulteration of honey – known to be carried out particularly in premium products. Much research has been carried out correlating the chemical composition with the plant species and area involved in production identifying a number of aroma compounds as marker compounds4.

Typically, if contamination is suspected in a food product, GC-MS screens can be carried out to compare the affected product and unaffected product. The data can then be screened for differences – and one of the advantages with GC-MS is that should the difference be due to volatile compound(s), these may be tentatively identified by comparing the data to a library database of spectra. The time it takes to screen data depends on the complexity of the profile and how obvious the contamination is. In addition, sometimes a food product may be subject to batch-to-batch variation or have a relatively short shelf life (e.g. a bakery product) which can further complicate trying to identify whether a difference is attributable to the contaminant(s). One way of combating this is to obtain volatile profiles on a regular basis over a period of time. These could then be referred back to in the event of a contamination issue. Leatherhead Food Research is currently exploring the possibility of building libraries of food product profiles using mass spectrometry to help in the rapid screening of food products for contamination.

Of course GC-MS-TOF is not the only mass spectrometer which can be used to detect adulteration. Liquid chromatography is suitable for the analysis of non-volatile compounds and large molecules such as proteins and the use of tandem mass spectrometry (MS-MS) provides high selectivity. This can facilitate the search for unique marker compounds to help combat adulteration.

LC-MS has been used to identify a range of adulterants such as melamine and urea (originating from fertiliser) in milk. Since urea is naturally found in milk, urea from an external source can prove tricky to determine. However, compounds biuret and triuret are typically present in synthetic urea at levels of one per cent; enabling detection of contamination from fertiliser5.

With LC-MS, protein marker compounds have been identified in milk which are species specific making them ideal for identifying whether an expensive milk e.g. buffalo milk has been diluted with cheaper cow milk6. Protein markers for honey have also been found which can be used alone for identifying whether or not the honey has been adulterated or in conjunction with the markers found by GC-MS4.

In some instances an adulterant may already be analysable by chromatographic means. For example, Sudan dyes which have been used to adulterate spices such as paprika. These can typically be analysed using a high performance liquid chromatograph attached to a UV-Vis detector (HPLC-UV/Vis). The issue with this form of detection is that peaks can potentially overlap7. LC-MS-MS can be a more selective aid in the identification of the different Sudan dyes. In this case, the selectivity removes any potential interferences that may arise from compound(s) in the sample matrix which might happen to show an absorbance at the wavelength used for detection with a UV/Vis detector.

Quaternary ammonium compounds (QAC) are found in biocides, pesticides, and disinfectants. These can be responsible for accidental contamination of food products – for example during the processing stage when washing and packing might take place. QAC residues have been found in a number of different foods worldwide and have affected fruits and vegetables. The EU Reference Laboratories for Residues of Pesticides developed a LC-MS-MS method for analysing two QAC compounds – DDAC and BAC8,9.

Some mass spectrometers can be used as standalone machines to analyse solid samples by means of a probe. Direct Insertion Probe Mass Spectrometry requires only small amounts of samples (a few grains of powder are sufficient to acquire data) and can be used for solid samples which may not be suitable for chromatographic techniques such as gas chromatography. Despite not having a system for separating compounds, depending on the sample matrix some separation is usually possible using temperature ramping. It can be used for the analysis of fatty samples such as butter or margarine and can also be used to assess oils. It has also been used in the analysis of freeze dried meat and the statistically collated data can be used to differentiate between different species (cattle, chicken, horse, pig, rabbit and sheep)10.

There is certainly the potential to extend the use of mass spectrometry beyond the analytical laboratory as a screening technique in the field or in the factory for the rapid identification of contaminants. Mass spectrometry has already been utilised in the analysis of elements on the moon11 and in recent times, rapid evaporative ionisation mass spectrometry (REIMS) was used to characterise near–real-time human tissue in vivo using an ‘intelligent knife’ (iKnife)12. With ever more compact mass spectrometers on the market, with user friendly software, mass spectrometry is becoming an increasingly accessible technique.

Currently many rapid methods use spectroscopic techniques such as Fourier transform – near infrared spectroscopy (FT-NIR) for the screening of adulteration in food products. For example, the routine screening of milk powder as part of quality control measures13. But how rapidly can a mass spectrometer be used? Is it possible to cut out the sample extraction steps typically associated with GC-MS and LC-MS? With direct analysis in real time (DART) ambient ionisation mass spectrometers, this certainly is possible. Like FT-NIR spectroscopy instruments, running a sample on one of these requires no solvents or sample preparation14 and has been reported to take as little as under 30 seconds15. It has been reported in the literature as quick, simple and suitable for high-throughput work, fitting the ideal of a rapid method.

Angela Calder has a MSc in Analytical Chemistry from Kingston University. She is a senior scientist at Leatherhead Food Research, which she joined in 2011. She runs the GC-MS-TOF which is primarily used for the screening of food products in taint investigations. She previously worked in the tobacco industry using chromatographic techniques for the analysis of tobacco smoke. Angela can be contacted at: [email protected].

Leatherhead Food Research is currently looking into rapid methods for adulteration in food products and the applicability of mass spectrometry in this area. If you are interested in collaborating in this, or in building a database of mass spectra for your food products, please contact the author of this article.