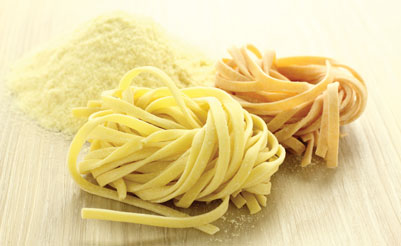 Gliadins are considered to be non-aggregating, meaning that their polymer chains do not interact to form large polymeric complexes. Glutenins are a heterogenous group of multichain proteins that are responsible for dough strength. Glutenin proteins can be classified into two groups: the high molecular weight glutenin subunit and the low molecular weight glutenin subunit. Glutenin proteins can form large polymeric protein complexes as a result of entanglements of long polymeric chains and their ability to form interchain disulfide bonds1.

Moisture is needed for dough formation. Gliadins and glutenins are packed very tightly in the protein bodies found in endosperm cells. As these proteins hydrate, they begin to expand, change their steric configuration, and expose reactive sites2. Thus, water acts as a plasticiser, increasing the intermolecular space and flexibility of gliadin and glutenin proteins allowing them the possibility of interacting with each other when the energy in the form of mixing/kneading is applied. Without mixing/kneading, the collision of glutenins and gliadins with each other will not take place. Mixing energy allows gliadins and glutenins interact with each other through disulfide bonds formed between their cysteine residues. The result of the simultaneous occurrence of gliadins and glutenins, moisture, and energy is the formation of a protein network that surrounds starch granules and provides the mechanical strength of pasta products.

Conversion of semolina into pasta

A pasta press is composed of an ingredient (semolina) feeding system, an ingredient hydration system (typically associated with a pre-mixer), a main mixer, and an extrusion barrel with an auger, extrusion head, and pasta die. Traditional pasta is made from semolina, the coarsely ground endosperm of durum wheat. Warm water (35 to 40°C) is sprayed onto the semolina in the pre-mixer. Enough water is added to bring the moisture content of the semolina to 30-32 per cent. High speed pre-mixer is commonly used to rapidly and evenly coat the semolina particles with water. The wetted semolina is discharged into the main mixer. Most mixers contain two counter-rotating horizontal parallel shafts with paddles set so that they move the hydrating semolina toward the extrusion barrel. The transit time in the main mixer is 15-20 minutes. While in the main mixer, the moisture penetrates the semolina particles, hydrating the storage proteins, gliadins and glutenins, and wetting the starch granules. As these proteins hydrate they expand, they become more flexible and expose potential reactive or bonding sites necessary for gluten development. Little or no dough formation occurs in the main mixer since there is not enough energy being applied to the hydrated semolina.

Most dry pasta manufacturers apply a vacuum (-63 to -80 kPa) either at the mixer or just before the extrusion barrel. Vacuum promotes hydration by eliminating surface tension associated with air. Vacuum also prevents air from being trapped inside the developing dough. Air trapped inside the extruded pasta will appear as a series of very fine bubbles resulting in a hazy appearance. If dried at high or ultrahigh temperatures, these bubbles will act as focal points for stress and could ultimately result in checking of the finished pasta.

The hydrated semolina is then directly discharged onto the rotating auger located inside the extrusion barrel. Traditionally, extrusion augers used in pasta processing have a length to diameter ratio between 6:1 and 9:1 and are configured with a constant root diameter and deep flights having a uniform pitch the entire length of auger. The dough is conveyed in the channel between flights on the auger; however, the flow of dough is not uniform in the channel. Dough near the root of the auger moves much more slowly than the material near the cylindrical barrel wall. Deep flights provide high conveying capacity and allow high back pressure flow in the auger.

There is evidence that the gluten network in pasta dough is not fully developed even after the extrusion; however, that does not imply that the extruded product does not have a solid and homogeneous structure. Matsuo et al5 concluded that low moisture content of pasta dough is not enough to fully hydrate the gluten proteins. This lack of moisture prevents the formation of the type of fully developed dough observed in bread baking.

Frank A. Manthey is a Professor in the Department of Plant Sciences at North Dakota State University, USA, where he has been the research leader for the Durum Wheat Quality/Pasta Processing Laboratory since 1998.

Elena de la Peña is a PhD candidate in the Cereal Science Graduate programme at North Dakota State University. She is originally from Burgos, Spain. Her dissertation topic is ‘Manufacturing optimisation of non-traditional pasta products’.