Dark chocolate may help to reduce your stress levels 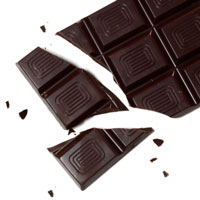 Eating a moderate amount of dark chocolate every day can help reduce the hormones in your body that make you feel stressed, according to a Nestlé study. Scientists from the Nestlé Research Center (NRC) in Switzerland examined the biochemical basis for chocolate’s reputation as a comfort food.

Their research revealed that the chemical compounds contained in dark chocolate may improve the disposition of people who experience higher levels of stress.

Nestlé scientist Dr Sunil Kochhar, who led the study, explained the findings as part of his presentation “Cocoa and chocolate: The science of delight”, at the national meeting of the American Chemical Society (ACS) in California.

He also discussed the company’s research into how the taste and aroma of chocolate is produced after cocoa beans have been roasted, as well as how the processing of cocoa might be improved to naturally enhance its flavour.

The Nestlé study into dark chocolate’s effect on stress monitored 30 healthy adults for two weeks. Every day each participant was given 40g of dark chocolate – about four squares of a large bar.

They consumed half the chocolate in the morning and the other half in the afternoon.

Those participants who recorded higher levels of stress at the beginning of the study experienced a reduction in the chemical reactions in their bodies associated with stress.

The results showed the level of stress-related hormones reduced in all participants, including those who were not assessed as stressed at the start.

“When you are stressed your body’s chemistry becomes unbalanced,” said Dr Kochhar. “In the long term this can be harmful to your health.

“We have found that eating a moderate amount of dark chocolate on a daily basis can help to balance the body chemistry of people who are stressed.

“It is possible to speculate that making dark chocolate part of a healthy balanced diet might lead to a chemical composition in the body that is better able to handle stress.”

The dark chocolate used in the study was made of up to 75% cocoa solids. These are rich in chemical compounds that affect your metabolism, the chemical reactions that happen in your cells.

“Anxiety and stress can have considerable effects on people’s wellbeing, causing a variety of physical and emotional conditions, and sometimes leading to more serious health concerns,” Dr Kochhar continued.

“These results strongly support our ongoing research efforts to establish the impact of certain food ingredients on human metabolism, and how they affect our health.”

The study, published in the Journal of Proteome Research, is one of several conducted by the Nestlé Research Center into the emerging health benefits of dark chocolate.

Nestlé scientists collaborated with experts from BASF, the world’s leading chemical company, and Berlin-based scientific organisation Metanomics GmbH on an earlier study. This examined the effects on microorganisms in the human gut associated with eating dark chocolate regularly.

The NRC has also collaborated with Loughborough University, a leading sports science institute in the United Kingdom, to investigate the use of dark chocolate as an effective snack alternative for active people.

At the ACS meeting, Dr Kochhar explained that Nestlé’s studies belong to only a tiny number worldwide dedicated to investigating the role of proteins in the flavour development of cocoa or chocolate.

Cocoa seeds undergo natural fermentation before they are turned into a key ingredient for chocolate making.

This has helped them identify a number of compounds that form when dry cocoa is stored, which are key to the chemical reactions that determine its aroma and flavour.

Its spring national meeting takes place from 25 to 29 March 2012 in San Diego, California.

He appeared alongside other international experts to discuss the potentially beneficial health effects derived from cocoa and other ingredients in chocolate.