New study delves into the global value of urban agriculture

From improving access to healthy foods to cutting pollution, a new study has looked in to the benefits of an industry that might one day be worth as much as USD$160 billion. 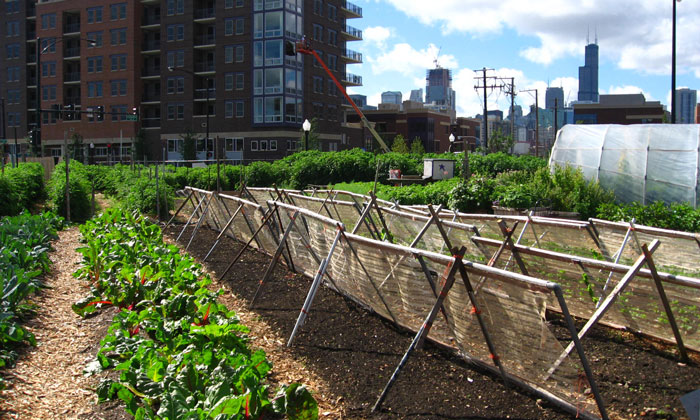 From the roof tops of Chicago to a tunnel 33 feet beneath a busy London street, urban agriculture is taking off. But with its sporadic emergence, its true potential has not been made entirely clear. Now, for the first time, a study by the National Science Foundation (NSF), Arizona State University (ASU) and Google researchers has used a data-driven approach to assesses the value of urban agriculture and quantify its benefits at a global scale.

They report their findings in a paper published in the current issue of the American Geophysical Union journal Earth’s Future.

“For the first time, we have a data-driven approach that quantifies the ecosystem benefits from urban agriculture,” said Matei Georgescu, a geographer at ASU and corresponding author of the paper. “Our estimates of ecosystem benefits show the potential for millions of tons of food production, thousands of tons of nitrogen sequestration, billions of kilowatt hours of energy savings, and billions of cubic meters of avoided storm runoff.”

“Analysis of the food-energy-water nexus sometimes leaves the impression that benefits are concentrated in one place and costs in another,” added Tom Torgersen, program director for NSF’s Water, Sustainability and Climate program, which supported the research. “But that’s not always the case. Urban agriculture is an underdeveloped industry that could sequester nitrogen in cities, generate energy savings, help moderate urban climate, reduce storm water runoff, and provide more nutritious foods.”

The researchers estimated the annual value of selected ecosystem benefits of urban agriculture as approximately $33 billion.

They projected an annual food production of 100 to 180 million tons, energy savings of 14 to 15 billion kilowatt hours (from insulation properties provided by rooftop urban agriculture), nitrogen sequestration between 100,000 and 170,000 tons, and avoided storm runoff of 45 to 57 billion cubic meters annually.

They estimate that with intense implementation, the overall worth of urban agriculture could be as much as $80 to $160 billion annually. Urban agriculture, the researchers say, could help feed a world that may face future challenges in industrial agriculture as a result of climate change.

“We’ve known there are benefits to having these small plots of land in our cities, but we found that the benefits extend well beyond having fresh food in the hands of those who consume it,” explained lead author Nicholas Clinton of Google Inc.

Added Georgescu, “By integrating across parts of the food-energy-water nexus, our work is a benchmark global scale assessment.”

In addition to Georgescu and Clinton, co-authors of the paper are Albie Miles of the University of Hawaii; Peng Gong of Tsinghua University, Beijing; ASU researchers Michelle Stuhlmacher, Nazli Uludere and Melissa Wagner; and Chris Herwig of Google.

“The most obvious benefit of urban agriculture is that it improves access to healthy foods,” said Stuhlmacher. “In addition to considering yield, our analysis evaluates the potential ecosystem benefits — such as urban nitrogen fixation, pollination, biological control of pests, control of damaging storm water runoff and energy conservation — that result from urban agriculture.”

The work, the researchers say, provides more than an accounting of urban agriculture in a single scenario. It can be used as a tool for future assessments of the changing urban agriculture landscape to understand trade-offs among urban design strategies.

“The value of this approach to the global community — research, government organisations, political groups — is that it provides local stakeholders with a framework they can use,” said Clinton. “For example, they can assess the local implications of varying urban agriculture scenarios.”

Georgescu added: “The estimates we provide are a benchmark for other researchers, and the societal benefits extend well beyond that because of the implementation of Google’s Earth Engine platform. Anyone on the planet who wants to know whether and how much urban agriculture can provide for his or her locality can now find out using open data and code provided with the paper.”

Looking toward the future, Clinton said that countries with the most incentives to encourage urban agriculture have two main characteristics — a large enough urban area to support agriculture, and a mixture of crops that lends itself to urban cultivation.

“Relatively temperate, developed or developing countries with the right mix of crops are expected to have the greatest incentives for urban agriculture,” he said. “That would include China, Japan, Germany and the U.S.”

In addition to NSF, funding for the project came from the U.S. Department of Agriculture, a National High Technology Grant from China, and Google Inc.