As if tomatoes weren’t healthy enough already, a multinational team of researchers has used genetic modification to pack them with up to six times as much vitamin E and double the amount of vitamin A. 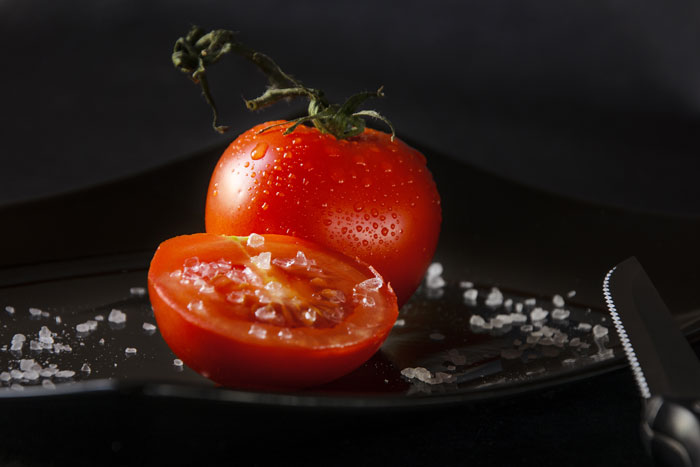 Scientists at the School of Biological Sciences at the University of Hong Kong (HKU), working with the Institut de Biologie Moléculaire des Plantes (CNRS, Strasbourg, France), have worked out a method to boost the vitamin and antioxidant content of tomatoes.

They were able to increase concentrations of vitamin E, provitamin A and lycopene, all nutrients with known health benefits, by as much as six times.

The research group manipulated the plant isoprenoid pathway through using a variant of 3-hydroxy-3-methylglutaryl-coenzyme A synthase (HMGS). The overexpression of HMGS in tomatoes increased not only phytosterols, squalene, provitamin A and lycopene, but also vitamin E (α-tocopherol) by 494 per cent.

TABLE 1: Increases in provitamin A, lycopene, vitamin E (α-tocopherol), squalene and phytosterols in S359A-transformed tomato fruits in comparison to the control.

The HMGS DNA used in these experiments originated from a food crop, Brassica juncea (Indian mustard), that yields edible leaves, stems and seeds, the latter used in vegetable oil production.

The research group had already reported that the recombinant HMGS variant S359A (in which amino acid residue “serine” at position 359 was switched to “alanine”) exhibits 10-fold higher enzyme activity. The introduction of S359A in the model plant  Arabidopsis increased phytosterol content.

Now, it has introduced the S359A into tomatoes, a crop plant. Although there were no differences in the appearance and size of the transformed tomato fruits, total carotenoids including provitamin A and lycopene increased drastically by 169 per cent and 111 per cent, respectively, as observed by a deeper colour of carotenoid extracts in S359A tomatoes over the control (Figure 1). Furthermore, these carotenoid extracts exhibited 89.5-96.5 per cent higher antioxidant activity than the control (Figure 2). Besides carotenoids, the transformed tomatoes displayed elevations in vitamin E (α-tocopherol, 494 per cent), squalene (210 per cent), and phytosterols (94 per cent), as shown in Table 1. These observations were attributed to the increased expression of genes in the isoprenoid pathway.

Professor Chye Mee-len who led this research said: “Increasing health-promoting components in crops is an important research area that aligns with the aspirations of Dr Wilson and Mrs Amelia Wong on the use of plant biotechnology for a sustainable future. The accumulation of the healthy components in food crops would provide added-value to fruits and vegetables in the human diet, as well as enrich feed for livestock and aquaculture.” Dr Wang Mingfu added: “Extracts with enriched phytosterols, vitamin E and carotenoids can be used in the production of anti-ageing cream and sun-care lotion. These compounds show excellent anti-inflammatory and antioxidant activity.”

There were no differences in the appearance and size of the transformed tomato fruits.

Funded by the Wilson and Amelia Wong Endowment Fund, Research Grants Council of the Hong Kong (AoE/M-05/12), and Innovation Technology Fund of the Innovation Technology Commission (Support to Partner State Key Laboratories in Hong Kong), this research has been reported recently in Plant Biotechnology Journal http://onlinelibrary.wiley.com/doi/10.1111/pbi.12828/full.

One response to “GM tomatoes packed with vitamins and antioxidants”