Does whisky taste better when diluted with water?

Researchers Björn Karlsson and Ran Friedman at Linnaeus University have presented an answer to this question. 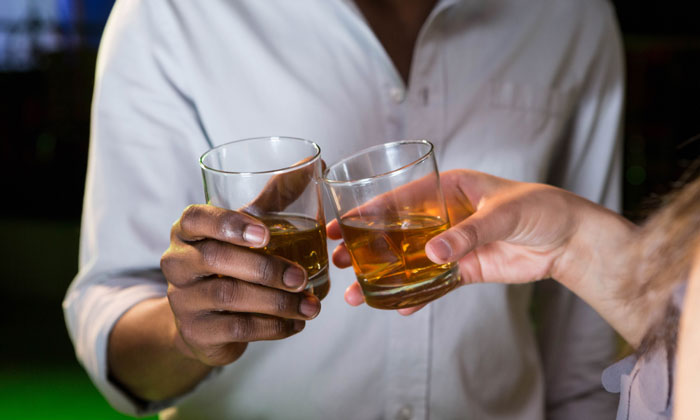 There is a reason why whisky is diluted with water before being bottled. The same reason also makes many whisky enthusiasts add a few drops of water in their glasses – it makes the whisky taste better. But why is this so?

Whisky is a chemically complicated beverage. After malting, mashing, fermentation, distillation and maturing, for at least three years in oak barrels, the whisky is bottled. However, first it is usually diluted to around 40% of alcohol by volume by the addition of water, which changes the taste significantly. For that same reason, whisky enthusiasts often add a little water in their glasses.

But why and how does water enhance the taste of whisky? Up until recently, no one had been able to answer this question, but now Björn Karlsson and Ran Friedman, researchers in chemistry at Linnaeus University, have solved a piece of the puzzle that will help us better understand the chemical qualities of whisky.

“The taste of whisky is primarily linked to so-called amphipathic molecules, which are made up of hydrophobic and hydrophilic parts. One such molecule is guaiacol, a substance that develops when the grain is dried over peat smoke when making malt whisky, providing the smoky flavour to the whisky”, Karlsson explains.

Karlsson and Friedman carried out computer simulations of water/ethanol mixtures in the presence of guaiacol to study its interactions. They found that guaiacol was preferentially associated with ethanol molecules and that in mixtures with concentrations of ethanol up to 45% guaiacol was more likely to be present at the liquid-air interface than in the bulk of the liquid.

“This suggests that, in a glass of whisky, guaiacol will therefore be found near the surface of the liquid, where it contributes to both the smell and taste of the spirit. Interestingly, a continued dilution down to 27% resulted in an increase of guaiacol at the liquid-air interface. An increased percentage, over 59%, had the opposite effect, that is to say, the ethanol interacted more strongly with the guaiacol, driving the molecule into the solution away from the surface”, Friedman continues.

Combined, these findings suggest that the taste and aroma of guaiacol, and similar compounds in whisky, are enhanced when the spirit is diluted prior to bottling and this taste may be more pronounced on further dilution in the glass. So what is the optimal number of water drops to put in your whisky?

“How we experience taste and aroma is highly individual. Some people choose to add ice cubes to their whisky, to cool it down and give it a milder taste. Thus, there is no general answer to how much water you should add to your whisky to get the best taste experience”, Karlsson concludes.

The article ”Dilution of whisky – the molecular perspective” has been published online by Scientific Reports. The results provide general knowledge about important physical qualities of non-ideal solutions, which affect the qualities of food and drinks (for instance whisky), and also how to design and give pharmaceutical products in different forms.