Arla Farmers Milk will be launched at the Great Yorkshire Show on 12 July, when Arla will kick-start a nationwide roadshow throughout July and August.. 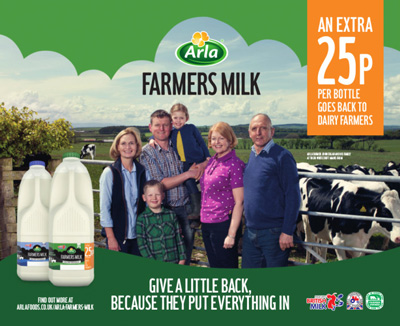 Discovering that almost two thirds of consumers would pay more for dairy products if they know the extra money goes back to farmers, Arla has unveiled a new milk to allow shoppers to do just that.

Commenting on the intiative, Arla Foods amba Farmer Board Director, Jonathan Ovens, said: “The launch of this new milk is a great boost to our dairy farmers. People want to know more about where their food comes from and who benefits and are willing to pay more if they know it goes directly to the farmers that produce it. As we’re part of a cooperative, the money we receive goes back to the farmers who supply our milk.”

Chris Brown, Senior Director, Sustainable Business, ASDA, added: “Launching Arla Farmers Milk in Asda provides our shoppers with the perfect opportunity to help farmers in these challenging times. It offers them the choice to pay that little extra for their milk knowing it will go back to the farmers and is another example of how Asda is supporting the dairy industry.”

The new Arla Farmers Milk will be officially launched at the Great Yorkshire Show on 12 July, when Arla will kick-start a nationwide roadshow throughout July and August.

From the Great Yorkshire Show, Arla farmer owners and colleagues move on to a further nineteen locations including shopping centres, city centres, supermarkets and Arla site.