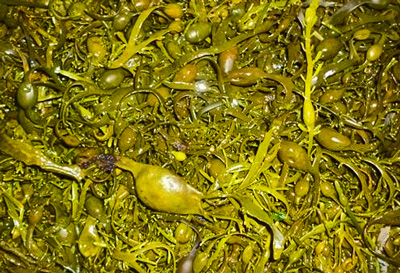 Fraunhofer researchers have shown how seaweed, which has a naturally salty taste, has the potential to replace salt. Without salt, many foods seem tasteless and bland. “Salt acts as a natural flavour enhancer, has a conserving effect and is essential for the human organism,” explains Dominic Wimmer, a researcher at the Fraunhofer Institute for Process Engineering and Packaging IVV in Freising. However, these positive effects are lost if we eat too much salt.

Around 77 percent of our salt intake comes from industrially processed foods. The biggest problem is the sodium that salt contains, which can contribute to high blood pressure, heart disease, kidney ailments, osteoporosis or even stomach cancer.

In the EU-funded TASTE project, Fraunhofer IVV researchers have been working with partners across Europe to investigate whether seaweed could be a good substitute for salt. Saltwater algae taste naturally salty and contain minerals such as potassium and magnesium, as well as trace elements. The researchers conclude that brown algae could be used as a salt substitute and help to reduce the salt content of industrially processed foods.

The researchers also checked out what salt substitutes are currently available on the market. These range from mineral salts and aromas to flavour enhancers. “We needed a benchmark to help us decide how to process the seaweed,” Wimmer says. Part of the preparatory work was to develop a common flavour language that all project partners understood.

The researchers determined what substances the seaweed species contain. “We then developed the process engineering based on the data. The goal was to come up with an algae product that can be processed industrially as a salt substitute,” Wimmer explains. The challenge was to grind the algae so as to preserve the minerals they contain, while removing odour-intensive substances.

And so the researchers ground, cooked, blanched and dried the algae. Parallel to this, two partners took care of the enzymatic treatment of the algae. The result was a brownish-green seaweed powder that could be used industrially as a salt substitute in the future.

To investigate what food tastes like when flavoured with the seaweed, experts took a look at white bread. Their conclusion: the brownish-green colour of the seaweed powder is still apparent after baking and the salty taste is not as strong as with salt. But the researchers say it is easy to process and can help to reduce the salt content. “Salt can’t be replaced entirely: as a functional baking ingredient, there’s nothing quite like it,” Wimmer says.