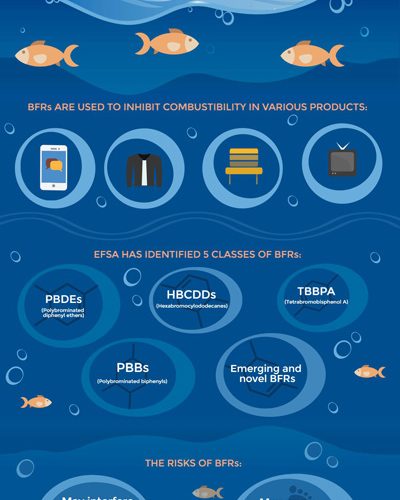 Researchers at the Universitat Jaume I de Castellón (UJI) have developed an innovative technique for the detection and quantification of potentially harmful contaminants in food samples, for use mainly with foods of marine origin. It allows monitoring of levels of toxic compounds like brominated flame retardants (BFRs) in seafood such as tuna and prawns.

BFRs are compounds widely used in a variety of products. They are toxic compounds harmful to human health and present in many foodstuffs, especially those of marine origin.

UJI researcher, Carlos Sales explains: “The pollutants enter the marine environment, where they are ingested by fish and shellfish. Being lipophillic substances, they cannot be excreted and are stored in the fats, meaning that when we eat a piece of tuna fish, for instance, we are also ingesting these compounds, which then, similarly unexcreted, remain in our bodies too. They have even been detected in breast milk at low concentrations, for example. While concentrations remain low, they pose no immediate health risk, but in high doses they become toxic and can lead to health issues including cancer, endocrine disruption and neurological disorders, making their monitoring in food vital.” Detection of BFRs in foodstuffs.

Ensuring that ensure that these compounds do not exceed acceptable limits in foodstuffs is essential. It is in this context that IUPA researchers, led by Dr Félix Hernández, have developed an innovative technique that optimises the monitoring of these compounds in food and environmental samples. The system uses atmospheric-pressure chemical ionisation (APCI) to detect these emerging pollutants more effectively than previous techniques. The new technique is more sensitive, with detection thresholds between 10 and 50 times lower and improved selectivity, making it much more accurate.

Sales explains: “With the APCI method, instead of directly ionising the molecules, we charge a gas (nitrogen), which collides with the molecules we want to see, leaving them ionised. In other words, the molecule is charged through collision, rather than by direct electrical discharge, meaning that it does break; this is what we mean when we talk about soft ionisation. It is a more sensitive and selective technique because, if we have the whole molecule, we can more confidently ascertain whether there are contaminants in the sample and at what levels.”

The researchers say the implementation of this innovative technique has considerable implications for food safety. An additional benefit of this technique is that it would bring costs down: being more sensitive and selective, it uses just half the materials needed for traditional techniques and analyses pollutants at much lower concentrations.