Investigating the potential of HPT for safeguarding food

Posted: 27 May 2016 | Victoria White, Digital Content Producer | No comments yet

Highly resistant fresh food could be achieved, according to encouraging results from ongoing studies that combine high pressure with temperature (HPT)… 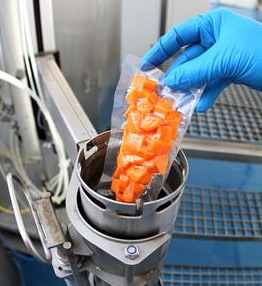 Highly resistant fresh food, preserved for months at the room temperature, could be achieved, according to encouraging results from ongoing studies that combine High Hydrostatic Pressure in combination with Temperature (HPT). Over recent decades, research on innovative food processing technologies has been carried out to identify ways to combat pathogens while reducing the need for chemical preservatives and improving the nutritional properties of the food at the same time.

Up until now, high temperature cooking has been used for sterilising food. But “to keep the nutrients inside the food product, the temperature must not exceed 50 degrees Celsius. And proteins decay at 80 degrees Celsius,” explains Nastasia Belc, general director of National R&D Institute for Food Bioresources in Bucharest, Romania.

A frozen meals manufacturer in Lelystad, the Netherlands, is testing a the HPT technique. It can release ambient or chilled, stable products without the high temperature impact of sterilisation. “The food item will be shelf stable or chilled stable for longer without having been overcooked, which removes its fresh look. The product is still cooked, but in a shorter time and at lower temperatures than the products sterilised in a traditional way,” states Harold Oldenbeuving, deputy director at Marfo Food Group.

Scientists appreciate the benefits arising from the combined effect of pressurising and heating: “Applying high pressure is a way to conserve food in a cold chain. It saves the energy, and all the nutrients and vitamins. Colour is kept in a so-called native state, without any spoiling”, says Karsten Olsen, Associate professor at the Section of Food Chemistry, Department of Food Science, at the University of Copenhagen. “High pressure-processed meat can be preserved for 12 weeks, as our earlier studies showed. It doesn’t have to be stored in a can; a bag can be used. If the heat is added, the meat can be preserved even longer.”

Grupo Alimentario is also experimenting the HPT technique.“We first heat the food to 70-80 degrees Celsius and then we pressurise it to 500-600 megapascals (Mpa). This will raise the temperature to more than 100 degrees, enough to destroy the most resistant microorganisms,” explains Francisco Javier Salcedo, technical director at Grupo Alimentario IAN.

The advantages of heat treatment and high pressure

The technology has the advantages of both the heat treatments (namely stability) and of the high pressure (less damage done to the food). But according to Belc, the results of this research need to be tested on a large scale in order to have a more realistic picture.

Currently the HPT technique is not being applied on an industrial level. The Spanish and Dutch food companies, which are developing this pioneering technology, are sharing their experiences within a European research project called Hipster. The project addresses the main barriers preventing the first market introduction and full deployment of HPT. The project will be implemented by an industry-driven consortium comprising five industries (both technology providers and end-users) and four RTD organisations. Together, they will tackle the most critical barriers for the deployment of the HPT technology in the food industry, overcoming the major challenges for full commercialisation.

Salcedo thinks that more studies are needed, especially in the field of microbiology, while Oldenbeuving considers the technology is too expensive for a sole company to afford. Professor Olsen agrees: “From an instrumental point of view, it is quite sophisticated and expensive. It requires a lot of steal. When you apply 6000 bar to the system, you need a very dense steal container. The biggest high-pressure units contain 215 litres and they can be as tall as a five-storey building.” However, he points out, the positive thing is that the industrial processing time can be reduced.

The HPT researchers expect to end the experimental phase, start selling the technology and apply it on a large scale by 2019.