Posted: 3 May 2016 | Victoria White, Digital Content Producer | No comments yet

Ecotrophelia, the UK’s student food innovation competition, has received the greatest number of entries ever this year… 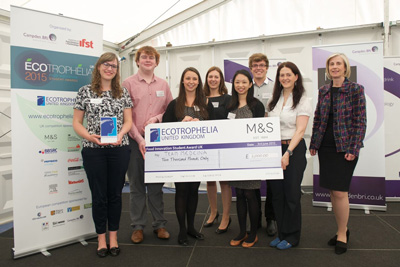 Ecotrophelia, the UK’s student food innovation competition, has received the greatest number of entries ever this year. From idea generation through to the final packaged product, the teams in the competition get a hands-on experience of what it takes to bring an eco-friendly food or drink to market.

Bertrand Emond, Head of Membership and Training at Campden BRI said, “It’s very encouraging to see interest in Ecotrophelia UK growing year-on-year.  A record nineteen teams from across the UK have entered the competition this year and the standard has been exceptionally high. We are delighted to have so many big names supporting Ecotrophelia to help attract the brightest and the best young talent to the food and drink industry.”

After much deliberation, a panel of new product development experts has selected the five finalist teams:

The shortlisted teams will pitch their ideas to a panel of food experts from Marks & Spencer, Coca-Cola, Mondelez, PepsiCo, Sainsbury’s, Tesco and Warburtons for the chance to win a share of £3,500.  The winners will be announced at Campden BRI Day on 8th June and will go on to represent the UK at Ecotrophelia Europe at SIAL in Paris in October.

The UK heat of this Europe-wide competition was organised by Campden BRI in conjunction with the Institute of Food Science & Technology (IFST).