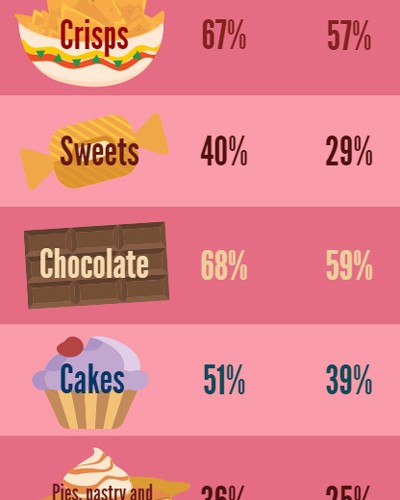 New research from Mintel reveals UK consumers have cut down on consumption of all snacks over the past year. Mintel research highlights that chocolate, which in 2014 was Britain’s most eaten snack tied with fresh fruit, has fallen as a snack choice by 9 percentage-points over the course of a year. Whilst over two thirds ate the snack in the month to December 2014, a year later in December 2015 just 59% said they ate the treat between meals. However, it’s not just ‘unhealthy’ treats which are seeing a drop in consumption according to Mintel’s research. The number of consumers eating fresh fruit outside of mealtimes dropped from 68% in December 2014 to 61% in the month to December 2015, and the proportion snacking on fresh vegetables dropped from 32% to 21%.

But it seems that by and large, Brits are far from snack-free. Overall, 95% Brits ate snacks in the month to December 2015, down by just 2 percentage-points in 2014.

Amy Price, Senior Food and Drink Analyst at Mintel, commented on the research: “Snacking in the UK is almost universal, however health considerations continue to play a significant role in the market. Health remains an ongoing issue for consumers, with calorie and sugar content of high relevance and as swathes of the population try to address this, it appears to have had a knock-on effect on consumer snacking. Currently new product development is failing to cater to the demand for healthier products, suggesting scope for innovation in healthier variants to be used to appeal to health-conscious consumers.”

Mintel’s research has found that there is a strong demand for healthier snacks amongst snackers, with 70% of snackers agreeing that snack manufacturers should do more to reduce sugar in snacks. Additionally, over half of snack eaters say they would be interested in snacks sweetened with sugar alternatives, such as honey or agave syrup, and 54% would be interested in healthier versions of their favourite snacks, such as low-fat crisps.

“New product development is currently failing to cater to this demand for healthier products, with low/no/reduced calorie, fat or sugar claims accounting for a small share of product launches in 2015. This suggests that exploring healthier formats in these areas could be a way to appeal to snackers without fear of backlash,” Amy added.