Researchers take a closer look at the science of frying food 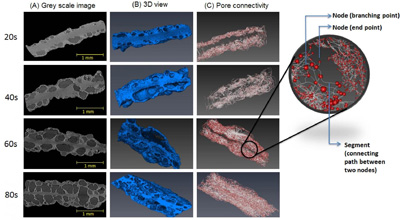 Food scientists have taken a closer look at what exactly goes on inside food during frying in order to improve products. Pawan Takhar, a University of Illinois food scientist, is interested in the food’s uptake of oil during frying and how that oil gets distributed throughout the food. “Through conventional lab techniques we can already see how much oil content is in food material, but we didn’t know how it gets distributed throughout the material,” he says.

To understand the distribution of oil better, Takhar and his lab recently conducted a study using X-ray micro-computed tomography (micro-CT) to gain 3D images of the microstructure of fried potato disks after they had been fried for various lengths of time.

During deep frying, as food is immersed in hot oil, water in that food quickly evaporates and steam pressure builds. This pressure affects the microstructure, including the porosity as well as the twistiness of the pathways between those pores (tortuosity). This determines how and how much oil gets taken up into the food.

Takhar says about 986 2D images of the potato samples were collected and then combined to produce 3D images. Using the 3D images, they were able to gain more information about the pores and pore networks in the material.

The researchers observed that as frying time increased, pore size increased, allowing for greater uptake of oil. They also saw a correlation between oil content and how the network of pathways between the pores changed throughout the frying time. These pathways act like channels for water and vapour flow and oil penetration in the food.

“As you fry the material, you can see how those pore structures are forming,” Takhar says. “We found that in the beginning of frying, the pore network is very complicated. The waviness in the pathway, the tortuosity, is very complex in the beginning so the material resists oil penetration. But as the frying progresses, those pathways become simpler. Pores open up and are easily accessible from the outside and oil can be taken up.”

Takhar also explains that oil was observed distributed across the full thickness of the potato disks. In thicker materials with lots of moisture (like chicken nuggets and French fries), they have observed the oil to remain near the surface as continuous evaporation helps to resist oil penetration.

“It is not easy to make a product that has no oil and still provides taste, flavour and texture that consumers enjoy,” he says. “People like that fried flavour and the texture of crispiness outside and softness inside. At the same time you want to reduce the oil content to make the food healthier. With this network study we wanted to see how those networks are formed, because networks are also related to texture.”

The researchers say it is a combination of the oil content and air pockets in the pore structure that provide the desired crispy texture.

The findings from the potato disks in the study can also be applied to other fried foods, Takhar says. His lab has done previous research on frying using chicken nuggets and French fries.

While Takhar and his lab have done mathematical modelling of what happens during frying–just one previous paper outlines over 100 mathematical equations involved in the process–he says this study provides some experimental validation as to what is happening inside the food material.

“I would say we still only understand about 10 percent of what is taking place during frying,” says Takhar. He and his lab have studied the effects of frying for 10 years. “For an engineer or a food scientist, it’s the ultimate problem because it’s so complicated.

“Our aim is to make these products healthier, so that they have the same taste and texture but, at the same time, have lower fat content. That is our long-term goal with our research.”