Patients with acute heart failure often have high levels of a metabolite of which red meat is a major dietary source, according to a new study… 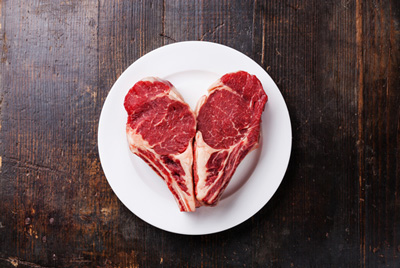 Patients with acute heart failure often have high levels of a metabolite of which red meat is a major dietary source, according to a new study from researchers at the University of Leicester. Red meat, which has been reported to be associated with cardiovascular disease, is a source of L-carnitine which is broken down by gut bacteria to form the metabolite trimethylamine N-oxide (TMAO).

The study was the first to investigate association of TMAO levels in acute heart failure patients, a condition associated with high mortality and morbidity – and suggests involvement of the gut microbiota and diet in outcomes of acute heart failure.

This study shows an association between circulating levels of a metabolite of this process with prognosis of acute heart failure.

Professor Suzuki said: “Patients with acute heart failure showed higher levels of the oxidised metabolite TMAO in those that died or had a repeat admission to hospital with heart failure within the first year.

“Our study shows that higher levels of TMAO, a metabolite of carnitine derived from red meat, is associated with poorer outcomes associated with acute heart failure, one of the main diseases of the heart.

“This metabolic pathway provides a possible link between how red meat is associated with heart disease.”