Arla has launched a unique branded milk product, Arla ‘Best of Both’ (or Arla BOB), a fat-free milk that the company says tastes as good as semi-skimmed… 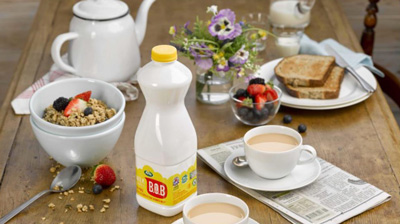 Arla says that Arla BOB is a fat-free milk that tastes as good as semi-skimmed.

The farmer-owned dairy cooperative has spent three years developing the technology to produce Arla BOB. It involves collecting some of the naturally occurring protein in milk and carefully adding more of it back into skimmed milk to deliver a taste and texture that is as good as semi-skimmed and fat-free.

At a time when the UK Government is encouraging consumers to consider their eating and drinking habits, Arla says that Arla BOB is set to rewrite the rules on what milk drinkers can expect from the traditionally blue, green and red-topped milk aisle. Arla BOB has a yellow top, distinguishing it from other bottles.

The launch is part of Arla’s drive to add value to its milk, through the development of innovative products. It follows on from the successful launch of Arla Protein, Arla Skyr and Arla Big Milk last year.

Sarah Baldwin, Vice President, Marketing, Arla Foods UK, comments: “We are perfectly positioned to launch something genuinely pioneering and Arla Best of Both is one of the biggest innovations we’ve created in the milk category. Our innovation strategy is to develop great tasting and healthier products whilst investing to help drive consumer understanding of dairy which we feel is part of our responsibility.

“With organisations like Public Health England encouraging people to consider drinking lower fat milks, we believe Arla BOB will be a popular choice for many consumers.”