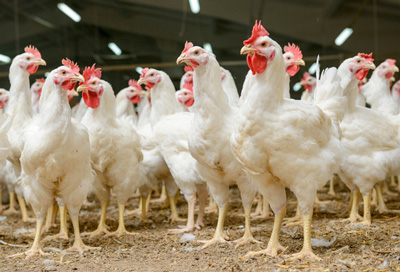 A new technique that monitors the movement of chickens could be used to predict which flocks are at risk of becoming infected with Campylobacter. Researchers from Oxford University have found that by using a camera system to analyse the ‘optical flow’ of chickens, at-risk flocks can be detected when the birds are only seven to 10 days old – much earlier than is usually possible with conventional on-farm sampling methods.

Despite efforts to improve biosecurity, Campylobacter – which can reach humans through raw or undercooked chicken – has so far been persistently difficult to eliminate from the food chain. This new early warning system has the potential to transform the way Campylobacter is controlled, benefiting producers, consumers and the birds themselves.

Dr Frances Colles from Oxford University’s Department of Zoology, said: “Despite intensive efforts to improve on-farm biosecurity practice over the past decade, more than 70% of EU broiler [meat] chicken flocks remained Campylobacter-positive at slaughter during 2008, and the incidence of human disease continues unabated. This suggests that environmental contamination of growing broilers may not be the only cause of high rates of Campylobacter infection in chickens and that key points for intervention – for example, in breeder flocks, hatcheries, or management in the first week of chick life – remain unrecognised.”

The Oxford team tested the hypothesis that flocks colonised with Campylobacter might be distinguishable by their behaviour, following suggestions that infection could have an impact on chickens’ welfare. The team used a novel and non-invasive way of monitoring the chicken behaviour- they analysed optical flow patterns from cameras inside broiler houses.

Professor Marian Dawkins, Professor of Animal Behaviour at Oxford, explained: “Optical flow works by detecting the patterns formed by changes in brightness in moving images, both temporally and spatially. It is computationally simple and does not require tagging or marking individual animals, making it ideal for long-term continuous monitoring of large groups of similar animals such as egg-laying hens and broiler chickens, where optical flow is predictive of key welfare measures such as mortality rate.”

To test the hypothesis that optical flow analysis might also be able to detect when flocks become infected with Campylobacter, the researchers collected data for 31 commercial broiler flocks. They also collected faecal samples from those same flocks and tested them for the presence of Campylobacter at different ages (21 days, 28 days and 35 days) using standard laboratory methods. This gave a direct comparison between optical flow and testing from faecal samples.

Professor Dawkins added: “Use of this optical flow information has the potential to make a major impact on the management of commercial chicken flocks, for the benefit of producers, consumers and the birds themselves. Farm managers able to access such information in real time would have early warning of which of their flocks were most at risk of health and welfare problems, enabling them to intervene before these became serious and helping them to produce higher quality, healthier food with better welfare.”

One response to “Monitoring chicken behaviour could predict Campylobacter risk”