The hunt for low acrylamide potatoes 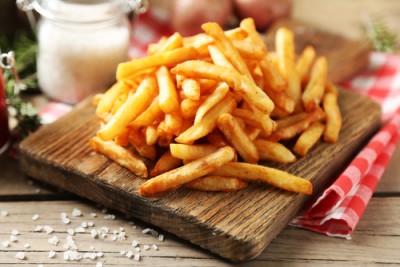 A group of researchers have set out to identify potato varieties that form less acrylamide. Led by University of Idaho researcher Yi Wang, the group assessed more than 140 potato varieties. The researchers’ goal was to identify potatoes that make great French fries and form less acrylamide. The amount of the chemical found in fried potatoes is thought to be directly linked to the chemistry of the raw potatoes.

Raw potatoes contain an amino acid called asparagine. The amino acid is found in many animal and plant food sources, and it’s a known precursor of acrylamide. When cooked at high temperatures, sugars react with amino acids, including asparagine, in a chemical process known as the Maillard reaction. The reaction is what gives fried potatoes their prized flavour and colour, but it is also what produces acrylamide.

Researchers planted 149 potato breeds in five potato-growing regions across the United States. Upon harvesting, they sent some of the raw potatoes to labs. There, the potatoes were stored in conditions similar to commercial potatoes. After storage, the labs tested the potatoes for their levels of reducing sugars and asparagine. Researchers then fried some of the potatoes and observed how much of the chemical the potatoes formed.

Relationship between genetics and the potential to form acrylamide

The researchers found that it is fairly achievable to identify potato breeds that produce less acrylamide, especially when compared with the industry standard potato breeds.

“The real challenge is to find the varieties that not only have those characteristics, but also yield finished products with desirable processing quality that meet the stringent standards of the food industry,” Wang said.

Two of the most promising varieties – Payette Russet and Easton – have already been released for commercial use.

Wang said the group hopes to identify genes that are related to lower acrylamide in certain fried potatoes. The study shows a strong relationship between the genetics of a raw potato and its potential to form acrylamide. If researchers are able to identify the specific genes, they may be able to eliminate them in the future.