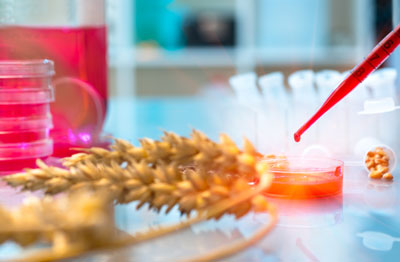 The results of the genetically modified (GM) wheat field trial held by Rothamsted Research in 2012-2013 have been announced. The data show that the GM wheat did not repel aphid pests in the field as was hypothesised and was initially seen in laboratory experiments conducted by scientists at the Institute.

Aphids are serious pests of wheat and other arable crops cultivated in the UK, transmitting viruses and reducing yield. Farmers spray insecticides to control aphids when infestations become severe due to lack of an alternative approach. Scientists at Rothamsted Research conducted experiments to discover whether wheat could be genetically modified to produce an aphid alarm pheromone and whether it would repel aphids in the lab and field. This would allow farmers to reduce insecticide spraying, benefiting the environment and making farming more sustainable.

Although the GM wheat did not repel aphids in the field, the five-year project did score some notable successes. The use of genetic engineering to provide wheat able to produce the aphid alarm pheromone (E)-β-farnesene (Eβf) was successful and robust – this is a world first and an important proof of concept in plant science overall. GM wheat plants produced the pheromone in significant quantities without major unexpected changes seen in the appearance or performance of the new wheat plants, which looked and yielded as normal.

In addition, in laboratory experiments aphids were successfully repelled by the Eβf signal. Scientists went on to test the GM plants in open field conditions. However, in the field trials there was no statistically significant difference in aphid infestation between the GM wheat and the conventional wheat used as a control (both of the same variety, Cadenza).

Professor Huw Jones, senior molecular biologist at Rothamsted Research with oversight for the genetic changes in the plants, said, “As scientists we are trained to treat our experimental data objectively and dispassionately but I was definitely disappointed. We had hoped that this technique would offer a way to reduce the use of insecticides in pest control in arable farming. As so often happens, this experiment shows that the real world environment is much more complicated than the laboratory.

“However, many aspects of this experiment were highly successful. The genetic engineering component worked very well and GM wheat plants performed as hoped during cultivation. It would have been a fantastic outcome if the experiment had given positive results in the field too but this was not the case and for a first attempt, this was not entirely unexpected.”

Plant scientists working in disease and pest control are accustomed to finding a divergence of results between the laboratory and the more realistic conditions of the open field. The challenge lies in answering the question of why this is. For the GM wheat, the experiment was complicated by the fact that the 2013 growing season saw a wet summer with low aphid numbers – this may have made it less likely that a statistically significant result might have been obtained.

Rothamsted scientists think that the aphids may simply have become habituated to the constant production of the alarm pheromone – this might be akin to people ignoring a car alarm that never stops ringing. This opens up the prospect for further scientific work at Rothamsted to try to better mimic the production of the pheromone in nature.

As Professor John Pickett, FRS and Michael Elliott Fellow at Rothamsted Research said: “The research project overall provided us with fascinating results. We now know that in order to repel natural aphid populations in the field, we may need to alter the timing of release of the alarm signal from the plant to mimic more closely that by the aphid, which is a burst of release in response to a threat rather than continuous.”

“This may require altering release rates of alarm pheromone from the plants, but also engineering the wheat plant to release the pheromone only when the aphid arrives. We might also consider conducting trials in environments where high populations of aphids are more likely, to reduce the likelihood of planting the trial and then having relatively few aphids arrive, as happened in this experiment.”

The results of the GM wheat project are published in Scientific Reports.