“Entopod” could help make insects the food of the future 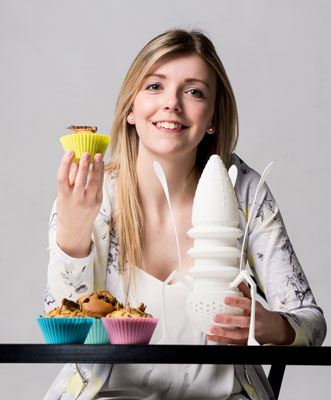 An innovative cookery kit has been created to encourage people to eat insects as part of their daily diet. Courtney Yule with her Entopod

Insects such as beetles, caterpillars and grasshoppers are a staple in many parts of the world. But despite them being low in fat and calories and containing as much protein as beef, many in the Western world do not find the idea of swallowing insects very appealing.

Now a student from Edinburgh Napier University has designed her own ‘starter kit’ for turning insects into a tasty meal. Courtney Yule was inspired by studies identifying entomophagy – the practice of eating insects – as the best way to feed the growing global population.

Courtney’s “Entopod”, which mimics the shape of an insect, promotes the idea of insects as a sustainable food source while also trying to dispel the “yuck factor” which inhibits people from tasting them.

The device – one of hundreds of exhibits created by students to be showcased at Edinburgh Napier’s 2015 Degree Show – is designed to encourage experimentation by providing everything needed to create a range of insect-based recipes in one portable product.

Courtney said, “The main barrier is obviously getting consumers to accept the idea of eating insects. Before I began this work I didn’t even like to touch them, but I don’t have any problem with eating them now and it is a practice which is growing in popularity every day.

“People think nothing about eating prawns and shrimps but they have a different reaction to grasshoppers and crickets. However, the more you read about the health benefits, the less bothered you become. You can do anything with insects; sweet and sour grasshopper, mealworm macaroni, lime and ginger locusts or cricket cookies.”

Courtney carried out research which found most people would consider eating insects. However, many did find the look off-putting. The taste and texture of the initial bite often came as a pleasant surprise, and she decided there would be interest in a ‘starter kit’ which would allow people to experiment with entomophagy.

The plastic Entopod inludes a grinder to create insect flour that can then be baked into recipes or added to shakes, and detachable containers to heat food in the oven, microwave or on the hob. Insect fondue is also a possibility with the addition of a candle underneath the leg stand, and the reverse ends of the eating utensils used as skewers. Insect snacks can also be stored in the detachable containers, perfect for a lunch on the go or as part of a high-protein diet.

Courtney added, “A lot of people are now supplying dried insects but in the course of my research I have not seen any other products which help in preparing them to eat. I am now at the stage of tweaking design components, and although the prototype is white I am also working on bright neon and anodised colours resembling the natural colouring of insects.  After the degree show, I will be taking it down to the New Designers show in London in July.”