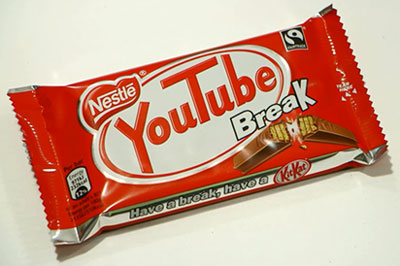 This is the biggest redesign of the iconic KitKat wrapper since the brand came to market 80 years ago.

The words “YouTube break” will replace the KitKat logo on over 600,000 limited edition KitKat wrappers. This forms one of 72 different types of ‘breaks’ to feature on more than 400 limited edition designs across 2 and 4 finger and Chunky bars as part of the campaign. More than 100 million of these specially designed packs will be produced in total over the course of the campaign.

Through the “YouTube my break” branding, Nestlé and Google aim to help people make the most out of their down time. The campaign is based on the consumer insight that KitKat consumers are also YouTube fans, and that the video platform is uniquely placed to provide real time insights into the world’s most watched videos.

On top of the packaging initiative, Nestlé is also using Google’s voice search technology to deliver the world’s most entertaining videos straight to its customers’ mobiles.  Searching for “KitKat YouTube my break” on their phone, users will be introduced to a KitKat video followed by a playlist of the latest top four trending YouTube videos anytime, anywhere worldwide.

The collaboration between Google and KitKat comes after Google named its Android operating system 4.4 update ‘KitKat’.

David Black, MD Branding & Consumer Markets, Google UK, said, “It’s great to see KitKat consumers are huge fans of YouTube and, along with our 1 billion users, regard YouTube as a favourite source of entertainment.

“With half of YouTube views now on mobile devices, ‘YouTube my break’ is a fun way for more people to interact on the channel and enjoy the best videos available. With up to 300 hours of video content uploaded to YouTube every minute, the top trending videos are likely to be changing all the time, making each new search as exciting as the last.”

Dame Fiona Kendrick, CEO and Chairman of Nestlé UK & Ireland, said, “At Nestlé we’re delighted to be working with Google again. As KitKat celebrates its 80th anniversary and YouTube turns 10 this year, it is really exciting to be taking the partnership to a new phase with our most iconic brand and slogan, ‘Have a break, have a KitKat’.

“We’re passionate about giving something back to our consumers which lead us to the idea to ‘celebrate the breakers break’. By teaming up with one of the world’s most popular entertainment channels, the ‘YouTube my break’ helps consumers have the most enjoyable break possible.”

Campaign’s hastag, #mybreak, has been moulded into the chocolate of 22 million bars

So far, the campaign’s dedicated hashtag #mybreak has been moulded into the chocolate of 22 million bars, with the wrappers suggesting various ‘breaks’ including variations from ‘’me time break’ to ‘sporty break’.