Little Herds: a company sharing the joy of edible insects

Could edible insects be the answer to feeding a global population expected to hit 9 billion by 2050? New Food caught up with Robert Nathan Allen, founder of Little Herds, to find out… 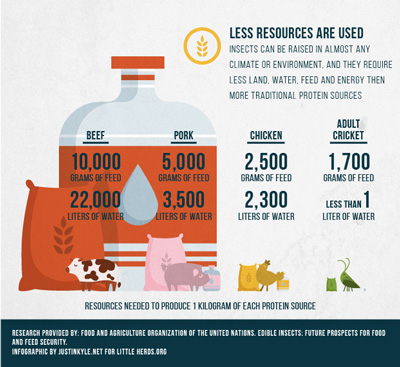 With the population of the world predicted to hit 9 billion by 2050, what we eat and how we produce it needs to be re-evaluated. Could edible insects be the answer to the food challenges we face? Non-profit company Little Herds certainly thinks so. The Texas-based company’s mission is to educate and empower communities, both locally and globally, to support and promote the use of insects for food and feed as an environmentally sound and economically viable source of nutrition.

Little Herds is in the final days of a crowdfunding campaign aimed at getting Americans to eat more bugs. If the company can raise $10,000, they’ll be able to make 200 educator kits to send to schools around Austin, Texas, allowing teachers to share the joys of edible insects with their students. To find out more about edible insects and the campaign, New Food caught up with Robert Nathan Allen, founder of Little Herds. First we wanted to learn more about edible insects and find out if they are the future of sustainable protein. Robert explained: “We think bugs are a part of the puzzle of sustainable protein, but there are no silver bullets. We understand that our food system is complicated and multi-faceted, but we also believe that insects provide part of that solution in a way that is resource-efficient, environmentally conscious, economically actionable and already has a ready receptive global market looking for insects as food. We envision a future where insects are considered a food just like any other livestock or plant protein source; another menu item, or option on the grocery shelf, and a way to fortify foods like pasta and crackers that might normally be nutritionally deficient.”

But how much protein is in an insect? We asked Robert how many crickets equate to a portion of chicken. He explained: “The National Chicken Council states that a 3.5oz serving size (~100 grams) of skinless boneless cooked chicken breast will have 31 grams of protein.

“If you ate the same weight of roasted crickets, 3.5oz or 100 grams, you’ll actually be getting around 65 grams of protein, more than double the amount of the chicken.” Robert added that insects like crickets contain additional health benefits over chicken: “Crickets contain much higher amounts of iron, calcium, fibre, poly- and mono- unsaturated fats like Omega 3s and 6s, and many other vitamins and minerals not found in animal proteins outside of fish. The beauty of insects is that you can get better nutrition in a smaller serving size, and because you can abstract them, it’s easy to get those nutrients through a fortified baked good like cricket crackers, pasta or chips.”

With an increasing global population, it is estimated that current food production will need to almost double by the middle of the century. The FAO has said that expanding the area of land devoted to farming is rarely a viable or sustainable option. Oceans are overfished and climate change and related water shortages could have profound implications for food production. Edible insects could provide a sustainable solution to this mounting food challenge, as Robert explained: “Across the board when it comes to resource inputs and negative outputs, insects as livestock outperform any other domesticated animal in their efficiency. They use less land, water and feed to produce more food with a better nutrition profile; produce fewer greenhouse gas emissions and no waste-water; and can be farmed and harvested in a more humane manner than any other domesticated species of animal.” As well as the nutritional profile of bugs and the resource benefits of farming creepy-crawlies, Robert explained that the fast growing nature of insects such as crickets can provide additional benefits: “Crickets can grow from an egg to egg-laying adult in five to eight weeks. Other livestock like broiler chickens can be grown about as quickly with growth-promoting diets, but most livestock will naturally take months if not years to reach their harvest weight. This makes insect farming particularly impressive when considering emergency or disaster scenarios. If a hurricane or earthquake destroys an agricultural system that a community relies on, insects can be farmed much more quickly and prolifically than other livestock options and can start feeding communities in a matter of weeks.”

So eating insects does seem like a viable solution to help address the challenges facing food production but why is Little Herds trying to get children to eat insects? Robert explained: “We’ve found that children often don’t have the mental taboos against eating insects built up the way that adults do, and they’re much more open to trying insects for the first time. They’re also the next generation of farmers, chefs, researchers, policy makers and entrepreneurs. If today’s children grow up with insects as a normal and acceptable food source, much like the story of sushi, we can begin to eliminate the cultural aversion to this incredible food resource. Lastly, children are often the ones who can most benefit from the proteins, fats and vitamins that insects are full of, and even in developing countries like the USA, many children live in food-insecure households and need these important vitamins and minerals.” Robert described how getting children normalised to edible bugs could nurture a generation of insect farmers: “We believe today’s kids in the west will be first generation to truly view insects as just another food. This has two-fold benefits. First, it will be beneficial for the western food culture to include this nutritious and sustainable option. Secondly, when the west is normalised to eating insects, we hope to see a renewed interest in the younger generations of developing countries who have begun to view insects through the western lens, as something poor people, rural people or older generations eat.”

To help educate children, Little Herds is crowdfunding to create educator kits. Robert gave more details of the project: “We’re excited to be crowdfunding through BarnRaiser to fund part of our operational costs to continue our educational outreach activities, begin our Consumer Reports project and support our first international project building cricket farms for orphans in Kinshasa, DRC in partnership with Farms For Orphans, Entomo Farms and Mophagy. When we hit our stretch goal of $10,000 we’ll be able to create and send out 200 educator kits filled with resources and samples so that teachers in Austin can introduce edible insects to their students in a fun, engaging and cost-effective way.”