It is five years since Innova Market Insights identified interest in clean label options as one of its Top Trends and despite concerns over its definition, the growth in products marketed on a clean label platform has continued relatively unabated… 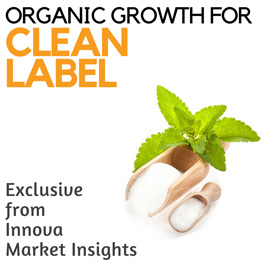 It is now five years since Innova Market Insights identified interest in natural and clean label options as one of its Top Trends for 2011 and despite concerns over the definition and use of the term ‘natural’ in some quarters, the growth in products marketed on a natural or clean label platform has continued relatively unabated.

Over 23% of total global new product launches recorded by Innova Market Insights in the 12 months to the end of August 2015 used one or more claims relating to naturalness, freedom from additives and preservatives or organic certification, up from 19% two years previously and 17% two years before that. This total rises to over 30% in the US.

This trend has continued despite rising concerns over the use of the term ‘natural’, with a radical and ongoing effect on ingredient use in the industry, with efforts directed towards clean labelling and the use of all-natural or predominantly natural formulations wherever possible. As a result natural ingredients are increasingly in demand, resulting in the arrival of new options in some instances and the revival and updating of some established products in others.

The rising popularity of natural sweeteners has been strongly in evidence in recent years, as exemplified by the growing use of stevia. In combining calorie, particularly sugar, reduction with naturalness, the spreading regulatory approval for stevia sweeteners in markets such as the US, Australia and then the EU over the past five years or so has caused something of a revolution in sweetener use. Penetration has not proceeded as fast as expected in some instances, however. The US has seen the best take-up in terms of product activity in recent years, accounting for around three-quarters of global launches featuring stevia in the 52 weeks to the end of August 2015. While stevia-sweetened lines are being introduced across a range of food and drinks sectors, launches appear to be focusing strongly around soft drinks and sports nutrition products, which accounted for a combined 55% of global launches using stevia.

In the soft drinks market, stevia is now being used by some leading players and brands. One of the most significant launches for stevia was almost certainly Coca-Cola’s introduction of its first stevia-sweetened cola with Coca-Cola Life in Argentina in 2013. The product featured a striking green label rather than Coca-Cola’s trademark red. It was sweetened with sugar and stevia and had 108 calories per 600-ml bottle, positioning it between classic Coke with 250 calories and zero-calorie Diet Coke. After some regional testing, Coca-Cola Life was also rolled-out nationwide in the US in November 2014, following its launch in the UK in August. Launches in a number of other European and global markets followed.

Rival PepsiCo responded with its own product, Pepsi True, also sweetened with stevia. It is currently being rolled out in test markets in the US, having previously been sold only via the internet. It has 30% fewer calories than regular Pepsi, again targeting the US mid-calorie sector. Other carbonate launches have included Royal Crown’s RC Neo mid-calorie cola line sweetened with stevia, as well as zero-calorie products such as Zevia, reformulated in 2014 with a new sweetener blend of stevia, monk fruit and erythritol and subsequently extended with a Tonic Water variant.

Other interesting stevia-sweetened introductions have included Yoatz yogurt and oat blends in the US, sweetened with honey and stevia; 50% Less Sugar Beanz from Heinz in the UK, launched in 2015 to replace the Reduced Sugar & Salt variant, using stevia to cut the sugar content, just as it did with its 50% Less Sugar Ketchup; Beauty and Go beauty drinks from AMC Innova in Spain sweetened with stevia leaf; and Fresh mints with stevia from Powerfresh, available in a number of European markets.

Other natural sweeteners are also increasingly being used in the focus on naturalness, often in combination with sugar, stevia and/or other sweeteners such as erythritol. Honey and agave are proving particularly popular, and there is also growing interest in the use of monk fruit. Chobani’s Simply 100 Greek yogurt range, for example, is sweetened with a blend of stevia, monk fruit and evaporated cane juice, while Yoplait’s Yogurt & Juice blends use monk fruit and stevia as natural sweeteners.