Sorting the Beef from the Bull

Posted: 12 February 2016 | Richard Evershed and Nicola Temple | No comments yet

Richard Evershed and Nicola Temple explain the role of science in uncovering some of the century’s biggest food scams in a new book, Sorting the Beef from the Bull. Read more here… 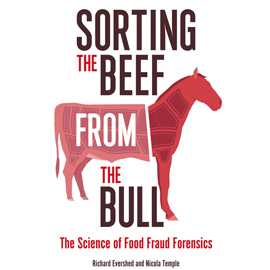 Sodium alginate – a product derived from brown seaweed – is commonly used by the food industry. The fine white powder thickens any liquid and then when the mixture is dropped into calcium chloride (a permitted food additive used to firm up soybean curds for tofu), a thin membrane is formed. The method is used by chefs to create culinary sensations – caviar-sized balls of cointreau to top a chocolate torte, for example. Yet, this seemingly benign substance can also be an agent of deception when in the wrong hands. With colouring agents and moulds, sodium alginate and calcium chloride become the tools for making a fake egg – complete with yolk. Wax and plaster are combined to provide this sham’s shell and then the bogus eggs can be placed into cartons and sold at market. Profits are double to quadruple those of traditional chicken farmers. Oh, and a little bonus is that any leftover ‘egg white ’ mixture can be dyed green or purple and with a little added juice ( just a splash), you ’ve got yourself some fake grapes as well! No chicken can do that.

Fake eggs started appearing in China in the mid-1990s and continue to crop up from time to time. The fraudsters have moved onto the next market before the customer knows they’ve been swindled. But some fakes are so good that people are even cooking them up and eating them. The health consequences of eating these eggs are unclear; though most of these ingredients are already used in food products, they are not used in the quantities found in the fake eggs.

Given the title of our upcoming book, Sorting the Beef from the Bull, you probably expected us to jump immediately into the 2013 European horse meat scandal. But in terms of creative food fraud, we thought slipping some horse into a batch of minced beef wasn’t nearly as imaginative as creating an entire egg from a bunch of powders and liquids. Building eggs from chemical compounds is, as far as we’re concerned, an extreme example of food fraud, which luckily isn’t likely to show up in UK markets. It’s a carefully manufactured replica of the real thing with only one purpose – to fool trusting people into buying it in order to earn the perpetrator some money.

Yet we process food to replicate other things all the time. There are soy-based products that taste and act like cheese. Fish paste is flavoured and fashioned to look like crab. A week-old cut-up apple has been dipped in chemicals to make it look like a freshly cut apple. And gelatin, sugar and some other additives are mixed together into fried egg-shaped sweets for the delight of children. So why is one fake egg acceptable while the other is not? Because it is about how it’s sold to the consumer – it’s about what it says on the packaging. We must make our purchasing decisions based on the information we receive and if we’re being lied to – whether it’s myrtle leaves in our oregano, horse meat in our beefburgers or a ham and cheese pizza that’s actually turkey and cheese substitute – it’s cheating.

Food science has allowed us to store, ship and conveniently whip up meals like never before. It has led to a diverse alimentary landscape and revolutionised food in ways we never thought possible – ways most consumers may still not realise are possible, in fact.  But it has also created a complex food supply network that brings with it more opportunities for fraudsters to adulterate our food – substituting cheaper products and selling them as more expensive ones in order to improve profits.

Food fraud is, quite frankly, an enormous topic – it could fill many books, some of which would be far more interesting than others. There is an entire story about the political and legal structure that seems to both prevent and enable food fraud. Another story lies in the economics of it all – the cost to industry, the cost to consumers and the financial benefits for the fraudsters themselves. Then there are the non-economic costs of food fraud – the environmental and social costs as well as the threat to human health. Another important story is how food fraud is linked to other criminal activities including drug trafficking, tax evasion, illegal immigration and even slavery.

In our book, Sorting the Beef from the Bull, we tell the story of the science that has helped detect some of the century’s biggest food scams, but also some of the sophisticated science behind committing them!  We use examples from around the world to empower readers through the knowledge of what is possible in the world of food fraud and actions consumers can take to help avoid being swindled.

By Richard Evershed and Nicola Temple