Originally domesticated in Ethiopia, tef is a wholegrain cereal that has become a lifestyle food alternative in the West. Its appeal is due to its gluten free qualities and its light and soft texture which can easily be combined with other cuisines. Tef products including tef flour, bread, cookies and the flattened bread injera can be found in organic/health food stores in Europe and the USA or can be purchased online. It is estimated that there are more than 90 restaurants in Europe providing Ethiopian cuisine, at the heart of which is injera. 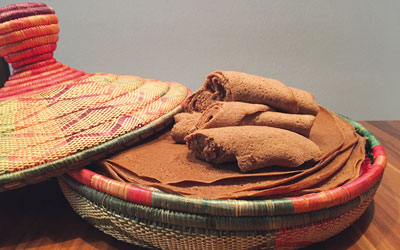 In Ethiopia, tef is currently the number one crop in terms of acreage, where it is annually cultivated by over six million farmers on about three million hectares of land. Farmers prefer tef to other cereals since it fetches higher market prices and is resilient to climatic and soil related stresses. Tef provides grain for human consumption both as a food and as an ingredient for home-brewed local beer and as fodder for livestock. Tef straw is also used as a construction material mixed with clay to plaster traditional wooden-walled houses and inner fittings. Although the cultivation of tef for human consumption was restricted for thousands of years to the Horn of Africa, the interest to grow and consume tef has been increasing in the West in the last decade due to the health-related benefits it offers.

The Ethiopian cereal tef can be used to make recipes that vary in type, form, and texture. This variety arises as a result of socio-economic differences in the society and sometimes as a result of the type of tef used. However, a common understanding among the different cultures is that tef products are a source of energy. Paradoxically there is also a belief mostly in cities that tef is nutritionally poor and serves no other purpose than to keep a stomach full. However, tef seeds contain a comparable and even better nutrient composition than rice and wheat, containing an excellent set of amino acids while being rich in calcium and iron (Table 1).

Coeliac disease, also known as celiac sprue and gluten-sensitive enteropathy is a prevalent food hypersensitivity disorder caused by an inflammatory response to wheat gluten and similar proteins of barley and rye1. The resulting intestinal inflammation often causes symptoms related to malabsorption of nutrients and other extra-intestinal symptoms. At present, the only available treatment is a strict gluten-exclusion diet. However, with cereals dominating the daily plates of millions of people, it may be difficult to totally avoid them and using gluten free cereals could be a reasonable alternative.

In a study published in the New England Journal of Medicine by Spaenij-Dekking et al.2, wheat, barley, rye, triticale, oats, corn, rice, and 14 tef varieties were analysed for the presence of T-cell stimulatory epitopes of α-gliadin, γ-gliadin, and low and high molecular weight glutenin by T-cell and antibody-based assays. The data gathered from this study have provided the first scientific evidence supporting the idea that tef is gluten free. Here at the University of Bern, Switzerland, we sequenced the first tef genome and through comparative genomics we found none of the epitopes associated with T-cell stimulation in tef3. Hence, tef is well-suited to address the growing global demand for gluten free products.

Tef flour can be processed in various ways to make specific food types depending on locality. The most popular is the flattened pancake-like bread; ‘injera’. Apart from its food value, tef is used to make home-brewed local beer. This potential has drawn interest in commercial breweries and the use of tef grain as a malt is recently investigated4,5.

In Ethiopia, mixing tef with other cereals is not uncommon. In urban areas this practice is increasingly becoming the norm. Tef seeds can be mixed with rice, sorghum, corn, and sometimes with wheat for making injera. As a result, except in individual households most of the restaurants and hotels both in Ethiopia and abroad serve injera mixed with either of the aforementioned cereals. One of the major reasons for mixing is the higher price of tef per kilogram as compared to other cereals. There is a high demand for tef products both in Ethiopia and outside and production is still struggling to keep up. To address this gap, conventional breeding work generated several high yielding varieties that are under commercial production. However, low productivity is still a problem, so conventional tef breeding is being supported with advanced approaches.

Due to its importance as a food and feed crop, tef has been the focus of scientific research since the early 90s. Historically, the objective has been improving productivity, which was 0.8t/ha in 20026. So far, the improvement work has bred varieties which are taller, mature earlier and produce higher yields than the locally adapted landraces. These improved varieties were adopted by farmers and some are still under production. Now, the average national yield of tef has doubled but is still far below than that from corn and wheat7. The variety development and adoption process brought some of the weak (inherent) traits of these varieties to light. The tall and vigorous growth characteristics gained through rigorous selection made the plants susceptible to lodging, during which the panicle bearing plant is displaced to the ground thereby leading to yield loss and problematic harvesting. This was a timely call for tef breeders who then started to investigate the tef gene pool in the hunt for genotypes that are potentially lodging tolerant.

However, breeding for lodging tolerance through conventional approaches have so far proved ineffective. This serves as a rationale to utilise advanced approaches to better understand the crop at a molecular level and to provide tools to support conventional tef breeding. Thanks to the handful of genomic studies made in the past two decades8, we have a much better understanding of tef and its genome. Here at the Institute of Plant Sciences, University of Bern, Switzerland, using ethyl methanesulfonate (EMS) based mutation, we developed tef lines that are shorter than the original parental line. These mutant lines were crossed with popular varieties and the resulting progenies are being field tested in Ethiopia9.

Transgenic approaches
Attempts to improve tef through transgene technology are in the early stages. Genetic modification through the introgression of foreign genetic material requires a stable and genetically reproducible transformation protocol which is non-existent for tef. At the moment, we are using non-transgenic approaches including TILLING (Targeting Induced Local Lesions in Genomes); and next-generation sequencing-based approaches such as Genotyping by Sequencing (GBS), Restriction Site Associated DNA sequencing (RAD-seq) and MutMap.

Owing to its benefits as a healthy food alternative and as an excellent feed for livestock there is a growing demand on the international market for tef. Private companies in Europe and the USA are starting to produce tef in large scale and sell it to individual buyers or wholesale retailers. Few companies have patent right on tef processing while others have obtained plant breeders rights for the varieties they have developed. However, while Ethiopia holds the right to tef genetic resources and their access, the fair and equitable sharing of the benefits of their use is still poorly understood and abused. With international conventions such as the Convention on Biological Diversity (CBD) in place, Ethiopia should cautiously engage in future genetic resource access and benefit sharing agreements.

Injera: A flat, pancake-like bread typical of Ethiopian cuisine. The main components of injera are the flour, salt, water, and yeast starter used for fermentation. Injera can have two main colours (white and brown) owing to the colour of the flour. Since the early days, white injera has been preferentially consumed by urban people while brown seeded tef is popular in rural and suburban areas.

Chechebsa: Flattened bread chopped into small pieces marinated with spiced and herbed butter. It is widely consumed in rural areas and has now become popular in urban areas.

Anebabero: Flattened bread overlaid with two to three individual circular breads. Each layer is generously coated with locally prepared spiced and herbed butter and is popular in most areas of Ethiopia.

Shekeka: Roasted brown tef flour marinated with herbed and spiced butter. It is popular in south Ethiopia, especially in the Bale and Arsi areas.

These food items are more common in Europe and the USA and include baked foods such as cookies, cakes, crackers, bread, pancakes, muffins and pasta.

Kebebew Assefa holds a Master’s degree in Agronomy from Haramaya University of Agriculture in Ethiopia and a Doctorate degree in Plant Breeding and Genetics from the Swedish University of Agricultural Sciences. Currently, he is Senior Researcher at the Ethiopian Institute of Agricultural Research and the National Coordinator of the Tef Research Program. He has played a key role in the development of improved tef cultivars in Ethiopia and training research personnel.