The art of oil processing consistency

Ensuring consistency during the production of high quality, extra virgin cold pressed oils doesn’t begin at the pressing or filling lines – it starts years before that. The actual process of creating seed oils isn’t that complicated. Seeds get pressed, solids get removed and the remaining oil is then filtered down to at least the FSA’s minimum level of purity. Beyond that, there’s not a huge amount of processing effort required – just filling into bottles, packing for transit and then despatch. The reality for manufacturers of cold pressed rapeseed oil, like many other food producers, is that the hard work involved in producing high quality, natural, consistent fast moving consumer goods begins long before the materials arrive on site for processing, two, three or four years before. 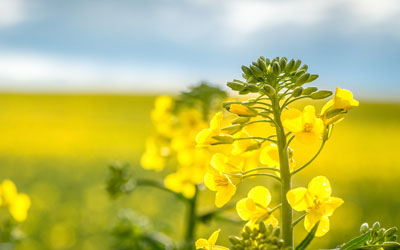 The rapeseed oil market is burgeoning. Growth in demand over the past decade has sent global prices soaring 300%. Its share of the cooking oil market in the UK alone grew 40% last year to more than £14 million and looks set to grow further still as consumers increasingly demand it as part of a healthier lifestyle.

With the market rising, investment for scientific research has been very much forthcoming. This has delivered significant increases in yields, viability and profitability, with new, better performing varieties of rapeseed being rolled out for growers every year.

Good news for growers, certainly; bigger returns from less input is the Holy Grail for farmers. Good news too for the rapeseed oil industry then, surely; faster growth and larger outputs should give a welcome boost to the bottom line. However, the sheer number of varieties now being grown now means that delivering consistent products is tricker than ever, particularly when it comes to the higher quality end of the market.

In any given year there are as many as 30 varieties of rapeseed being grown across the UK, all producing very different types of seed oil. Because varieties perform gradually better from year to year, the benchmark average steadily increases and poorer performing varieties drop off the recommended list. For example, a crop which yields 5% more than the average one year might yield 5% less than the average a year later. As a result of this, more than 200 varieties of rapeseed have been grown in the UK since 2005. That’s compared to the late 90s when growers had only a small selection of seeds available to them year after year.

The volatile organic ‘flavour compounds’ inside each seed mean that taste, smell, colour and consistency of pressed rapeseed oil can vary dramatically between varieties. The colour can vary from deep orange to yellow, green or purple, while the taste can range from mild to nutty to, occasionally, like cabbage. The same problem occurs from a scent perspective, all because of minute differences in flavour compounds. This means it is a challenge for producers now to find seed varieties that not only suit their products, but can be relied on for years at a time.

All rapeseed varieties are different, yet people want a reliably consistent product. Producers of natural oils can’t do anything to a new seed variety once it arrives on site except press it, filter the oil and then test it for suitability, so being able to produce consistent finished products year after year is vital. The question is how to ensure that consistency without going down the chemical route.

The science of selection

The answer lies in data and scientific measurements, applied at different stages in the growing process from R&D seed houses to field trials to harvested crops. Working with the seed breeders who develop new rapeseed varieties and the first farmers who then trial them, we build up a bank of information about each variety before it is even available to the general market. Data on each variety’s performance according to different geographical locations, soil types, levels of rain and sunlight and vitally its consistency from harvest to harvest allows us to build up a picture of its likely viability.

At this point, when just 25% of varieties remain in contention, we test the seed on our presses to see how it performs under strict production conditions. Following that, three month tasting sessions assess consistency against products from previous years, during which a further four fifths don’t make the cut.

The remaining varieties become our preferred choices for our farm suppliers, but less than half of those perform well enough in reality to be chosen again in year two, with many really promising varieties often getting written off. Issues like low consistency, vigour or yield, or high susceptibility to pests are spotted by our agronomy team in the fields. What we are left with is roughly just one tenth of the original varieties making it through to production, with half as many again making the cut after that.

This work has to happen years in advance, to make sure our seed varieties deliver a consistent product overall. We’re currently choosing which varieties our suppliers will be growing and harvesting in August 2016 to be pressed right through to September 2017, so we need to be able to pick seeds that allow our business to grow with the market.

Should we ever need to buy additional seed to meet growing demand, the time it takes us to test a new variety’s viability can directly impact our business. That is why we will very soon be reducing the four month process as it currently is – harvesting 5kg of seed and pressing into one litre of oil, taste testing then approving – down to less than a week using just a few hundred grams.

Laboratory testing that is as close to real time as possible will let us make decisions about seeds based on tiny seed samples tested organoleptically against hundreds of previous samples. Not only is this invaluable to our consistency, but we will be able to open up new seed parcels for pressing within a week.

Using light meters to assess the colour compounds in oils is relatively simple, with the differences quite obvious to the naked eye. It is those flavour compounds, which impart a flavour in the parts per million, that we need to test as accurately as possible. And there are hundreds of these volatile organics making up the flavour base.

We are trialling the use of gas chromatography-mass spectrometry (GCMS) with a university research department to capture these compounds which evaporate from the oil to give off the smell. By using liquid CMS to boil off certain components present in each seed parcel, we are able to test them against a number of key markers within the flavour base to judge consistency with our existing preferred varieties. This test highlights the obviously unsuitable oils within 12 hours, and shows where each oil sits compared to previous ones.

Improving the consistency of our testing process is an ongoing process that will become more accurate the longer we do it. After five years of testing we already have hundreds of samples, but we have to carry on repeating this process year after year. And because the smaller sample sizes are available from seed houses a year earlier, new varieties can be brought in for pressing a whole growing season earlier than was previously possible. For a growth sector like rapeseed oil production, where seed orders might rise tenfold within the next five years, margins of spare seed will get slimmer. Therefore opening up seed parcels quickly in this way will help the whole industry react to changing market conditions.

Managing tighter supply chains requires food producers to spot potential problems much earlier. The sooner an issue is identified, the more options are available, and new technologies are giving the industry the ability to do that. Tablet technology and wireless field sensors will soon provide us with real time data from the fields during the growing season such as rain levels, light exposure levels, soil moisture content and so on – allowing us to spot any fields where a crop is under stress.

It’s long been known that plants excrete substances when they get stressed that are less than desirable for food. Now we can measure this problem field by field and make a decision about viability long before harvesting, letting farmers find other uses for their crops and saving us from having to reject crops from a whole farm when just one field is affected.

This use of information will soon be in widespread use across the industry – the technology is now there to help producers keep their finished products more consistent than ever, almost regardless of the changing circumstances. The rapeseed industry is going to continue to grow rapidly. If forecasts come to pass, it could account for almost 10% of the UK’s rapeseed harvest by 2020, by which time the job of allocating enough seed for a ‘buffer’ will become more important than ever. Preparatory measures like these should allow the industry to keep growing without coming unstuck later on. By using science and technology smartly, we can be selective about which percentage we use.

Emma Woods is Technical Manager for Phoenix Speciality Oils. She has worked in agronomy and food product development for over a decade, and joined Phoenix Speciality Oils in 2014. She now works closely with the company’s supply network of British farms, overseeing field trials and crop testing for the food oils business. She also handles new client product development.