Listeria and produce: a troublesome liaison

Human illness due to Listeria monocytogenes (listeriosis) has been mostly frequently attributed to highly processed, cold-stored, ready-to-eat foods such as deli meats, seafood, soft cheeses and other dairy products. However, the first outbreak of listeriosis to confirm foodborne transmission of L. monocytogenes (Maritime Provinces outbreak, 1977-1981) involved produce (coleslaw). In recent years increasing numbers of listeriosis outbreaks have involved fresh produce, and contaminated produce continues to contribute to numerous recalls. Such trends highlight the significance of prevention and control measures for Listeria on fresh produce. 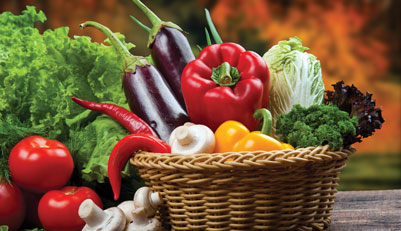 With the increased emphasis on good nutrition and health-promoting eating habits, consumers are encouraged to consume more fresh or minimally processed fruits and vegetables. While beneficial for health, the consumption of untreated produce is also a leading contributor to foodborne illness in industrialised nations. Contaminated produce has been implicated in nearly half of the foodborne outbreaks of illness in the United States and the European Union, with leafy vegetables being associated with more foodborne illness than any other fresh produce commodity. Produce-related outbreaks and sporadic illness are most often attributed to Escherichia coli and Salmonella, but an increasing number of high profile produce outbreaks and product recalls have occurred due to Listeria monocytogenes. Fresh produce such as cantaloupe, leafy greens and sprouts represent challenging food matrices with limited post-harvest mitigations to reduce L. monocytogenes adherence and growth, underscoring a need for new pathogen control strategies.

Even though new species of Listeria continue to be recognised, L. monocytogenes is the only species in the genus Listeria with consistent ability to cause human disease (listeriosis). Listeriosis is relatively uncommon but is accompanied with severe symptoms (septicemia, meningitis, abortions and stillbirths) and continues to be accompanied with a high fatality rate. L. monocytogenes is well known for remarkable, highly specialised adaptations mediating its interactions with intestinal epithelial cells, macrophages and other animal cell types and associated with its ability to function as a facultative intracellular pathogen. At the same time, this microorganism has a pronounced environmental lifestyle with a wide range of complex adaptations permitting it to persist outside of human or other vertebrate hosts. Its reservoirs in nature remain poorly understood and may include decaying plant material in terrestrial and fresh water ecosystems and invertebrate hosts such as protozoa, nematodes and insects. From such reservoirs it can spread to food processing environments and produce packing sheds to become a post-harvest contaminant.

Produce-related listeriosis outbreaks: What are the lessons?

Referring to the 2011 cantaloupe outbreak, not only did this outbreak result in numerous cases and deaths but it also conveyed a number of novel messages:

Referring to the 2010 celery outbreak, the L. monocytogenes outbreak in Texas was traced back to pre-cut celery used in chicken salad served at hospitals. Five of the 10 patients (all immunocompromised) died. Extensive contamination of the processing environment with the outbreak strain (of serotype 1/2a) was revealed during the outbreak investigation. In this outbreak, PCR testing of the samples yielded fewer positive results compared to culture-based isolation methods. This incident signifies the importance of ensuring the absence of L. monocytogenes in foods served to immunocompromised patients3.

These outbreaks reaffirm the impact of post-harvest steps in produce contamination with Listeria and underline the importance of taking necessary sanitation measures at the packing shed and processing environment to prevent contamination of the produce. Specific characteristics of L. monocytogenes, such as biofilm-forming potential and tolerance against disinfectants, should be considered in developing sanitation strategies.

The two outbreaks summarised above were chosen based on their public health impact and specific messages they conveyed; in addition, they were accompanied by extensive outbreak investigations that included bacteriological and genotypic confirmations. However, they are by no means the only produce-related outbreaks in recent times. In fact, produce-related outbreaks of listeriosis appear to be increasing in incidence in the United States. In contrast to previous outbreaks involving deli meats and dairy products, several of which were large, long-lasting and involved serotype 4b, many of the recent listeriosis outbreaks involve new vehicles, including produce; tend to be small (with the notable exception of the cantaloupe outbreak) and of shorter duration; and implicated strains tend to be of serotype 1/2a4.

Survival and growth on fresh produce

Key characteristics of L. monocytogenes for its potential to be a produce-associated food safety hazard include ability to:

At permissive temperature, for example 4-43oC, L. monocytogenes may be able to grow immediately upon inoculation on certain types of fresh produce (e.g. cantaloupe), without a lag phase5. Strain-specific differences in growth rate have been observed in some studies, but not others. The impact of microbial community composition on Listeria growth remains poorly understood, and limited data exist on microbial cultures that may be useful as competitive exclusion agents for biocontrol of the pathogen on produce. Listeria-specific phage has shown promise in experimental studies. However, certain L. monocytogenes strains exhibit resistance to phage, creating potential for inadvertent selection for such strains following use of phage as biocontrol.

Effective mitigation strategies to reduce or eliminate L. monocytogenes on fresh produce require farm-to-fork food prevention and control measures. Mitigations can be grouped into sub-categories based on stages being targeted: pre-harvest, post-harvest (packing/processing), transportation, retail and at the level of the consumer.

Focus is needed on approaches to limit on-farm access of L. monocytogenes to produce. In the field fresh produce can become contaminated with L. monocytogenes through seed, soil, compost/fertilisers, and water used for irrigation or for application of pesticides. Regular testing of such possible vehicles can enable early detection of L. monocytogenes so that relevant control measures can be taken. Another potential on-farm route for contamination is wildlife, suggesting the need for measures to minimize access of wildlife to produce in the field.

As a prevention measure it is important to regularly test environmental samples and equipment for Listeria, with the understanding that the presence of Listeria spp. can serve as indicator for L. monocytogenes. Positive samples will need to be followed by control measures employing rigorous cleaning and sanitation or even the re-design of facilities and the procurement of equipment that lends itself more readily to effective cleaning and sanitation. Water used in the packing shed for rinsing produce can serve as source for L. monocytogenes contamination, a risk which will be minimised by effective water treatment/disinfection protocols and by regular testing to confirm effectiveness of water disinfection schemes.

Produce can become contaminated from environmental sources (crates, truck); inappropriate stacking of pallets in trucks (e.g. raw chicken pallets on top of pallets with fresh produce; and human or animal (e.g. wildlife or pests) contact, especially during loading and unloading. Risks will be minimised via procedures to prevent cross-contamination and via adequate time-temperature schemes for produce during transportation, in the entire continuum from loading at the field or packing shed to the receiving end at retail or other point of sale (e.g. farmer markets and other distribution points).

At retail, fresh produce are available in packaged or unpackaged form. Unpackaged fresh produce can become contaminated by L. monocytogenes and is therefore critical to take necessary measures to prevent possible cross-contamination of the produce during storage and display. Possible routes of contamination include other food products (e.g. raw meat and poultry, deli meats), customers, employees, water used for misting produce, surfaces and equipment. Important control measures for retail include preventing cross-contamination, employing proper cleaning/sanitation and misting procedures, and time-temperature controls for storage and display of fresh produce. In the retail environment, time-temperature controls lend themselves the most to consistent, high-impact implementation.

Following purchase, key control prevention and control measures under consumer control include adequate time-temperature storage of produce (including during transport from point of purchase to the home); correct site for storage in refrigerators and coolers (e.g. to reduce potential for contamination for other cold-stored products such as raw meat or poultry); sanitising food contact surfaces between food preparations; prevention of cross-contamination with high-risk products (e.g. raw poultry) in the kitchen sink, on countertops, cutting boards etc.; rinsing with potable water and draining excess water; if peeling or cutting is needed, using adequately sanitized tools, utensils and containers with minimal risk for cross-contamination.

For thick-skinned fresh produce such as cantaloupe and watermelon, the surface of the produce should be dried after washing, using a clean disposable or re-usable towel, to reduce water available for pathogen growth on the surface. To further minimise risk for introduction of pathogens from the surface into the flesh, the knife should be rinsed with potable water following each incision through the exterior surface. Such measures seem especially relevant after the 2011 outbreak which involved whole cantaloupe, and would be especially advised for consumers at high risk for illness, e.g. elders, people in immunosuppressed states and pregnant women.

Each stage clearly presents opportunities for prevention and control of Listeria on fresh produce. However, the biology of the pathogen, with extensively documented capacity for persistence in food processing environments and equipment, suggests the especially critical impact of the post-harvest packing and processing stage. Measures such as those outlined above will need to be continuously implemented and improved upon. Furthermore, for certain produce types field packing of produce (i.e. produce packed directly at the field) may significantly reduce risks for contamination with Listeria by bypassing exposure of the produce to high-risk harborage sites.