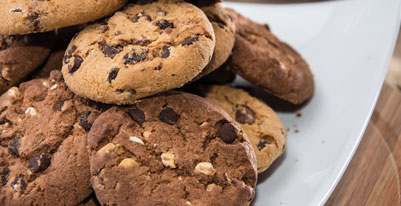 Fat, in either saturated or unsaturated form, is the most calorie dense nutrient available to us. The public health responsibility deal, which the UK Food Industry has signed up for, was put in place following the Call to Action on Obesity in England2, which set out the importance of action on obesity, and issued a challenge to the population to reduce its total calorie consumption by five million calories (kcal) a day. One route to do this is to reduce total fat content. Additionally, the public health responsibility deal saturated fat reduction pledge3 recognises the need to reduce saturated fat consumption to less than 11 per cent of food energy compared to current levels of 12.7 per cent.

Fat has a range of technical roles in both cake and biscuit manufacture and any fat reduction or replacement with an alternative material must ensure that these roles are still met.

The key role of fat in biscuit dough has been described as shortening4 , which gives biscuits their characteristic ‘melt in the mouth’ crumbly texture. The mechanism by which fat contributes this property to biscuits is by coating flour particles during the mixing of biscuit dough. This fat coating prevents gluten from absorbing water during mixing and becoming elastic and extensible5. Gluten development is essential in bread dough but is to be avoided in biscuit dough; otherwise the biscuits produced can be undesirably tough and chewy.

A secondary role of fat is to coat any air bubbles present in order to enhance their stability during baking. This role is similar to the stabilising effects of fats on bubbles in bread dough and cake batter6,7 and prevents the bubbles rupturing and coalescing into larger bubbles.

While both liquid and solid fat can be used to coat wheat particles to restrict gluten development, the firmness, and therefore the machine-ability of dough, is directly related to the solid fat index (SFI) of the dough fat8. Dough which contains liquid oil at the point of handling is difficult to work and develop9. The ability to coat bubbles to retain integrity during dough handling and baking is also best found in a fat with a developed crystalline structure rather than in a liquid oil10. Hard fats, rather than oils, are used to provide the required functionality in biscuit dough, with the naturally produced ingredients of choice being either palm oil, which has a melting point of around 36°C, or butter, which melts in the temperature range 32 – 35°C.

The use of saturated fats is therefore central to biscuit technology but also has a major role in cakes. By interfering with gluten development, fat contributes to a shorter texture with a softer eating crumb. Fat also acts to improve the shelf life of cakes since it acts as a moisture barrier, preventing significant increases or decreases in moisture content over typical storage conditions. Fat provides intrinsic flavour and lubricates the bolus of cake and biscuit during chewing and swallowing. Fat is also a reservoir for fat-soluble flavour components generated during baking.

Replacement or reduction of fat in both biscuit and cake therefore requires any alternative material to perform a range of technical functions associated with the development of structure and texture together with eating quality considerations. Having reviewed the literature on fat reduction, it was decided to pursue an approach based on modified water-in-oil emulsions.

The approach adapted was based on the teaching of patent WO 93/1961311, which relates to the use of a gelling system to replace water in margarine or reduced fat spreads. A liquid system containing all the necessary elements to form a thermally stable gel is prepared. The liquid system is then emulsified in oil to produce a water-in-oil emulsion. The liquid-to-solid transition is triggered once the emulsion is formed to give a gelled aqueous phase. The gelled aqueous phase is thermally irreversible, which means that the aqueous phase of the margarine or reduced fat spread produced has rheological properties which are largely independent of temperature. In practice, the liquid system can be a sequestered sodium alginate or sodium pectate solution containing a dispersed sparingly soluble calcium salt. Alginate and pectate form gels in the presence of calcium. The level and type of sequestrant can be used to control the rate of release of calcium such that gelation happens after the emulsion is formed. This is shown schematically in Figure 1.

Figure 2 shows examples of control and test biscuits where the reduced fat biscuits had 50 per cent of the shortening replaced by a 50:50 alginate gel-in-oil emulsion prepared using this technology. The corresponding dimensional measurements, hardness values and moisture contents are shown in Table 1.

This approach was also evaluated in high ratio cakes. Figure 3 shows examples of control (full fat) cakes compared to cakes where 50 per cent and 25 per cent of the fat has been substituted with a 50:50 alginate gel-in-oil emulsion.

It can be seen that the appearance and volume of test and control cakes are similar.

It can be seen that both moisture content and ERH of cakes decreased over storage. There is some evidence to suggest that the ERH of cakes made with the alginate gel was lower than comparable control cakes, despite having higher moisture contents. This suggested that the encapsulated water added through the alginate gel was less mobile than the water added to the conventional recipe. This means that a moist eating cake with a reduced fat content can be made with no reduction of mould-free shelf life. The fat composition of the cakes is shown in Table 2.

Charles Speirs graduated from The University of Strathclyde with First Class Honours in Food Science and also has a PhD in the field of food ingredients from The University of Nottingham. In his roles as Baking Science Manager at Campden BRI, Charles manages a bakery-focused research programme, organises technical training programmes, conferences and seminars, and translates clients’ needs into confidential contract research projects.