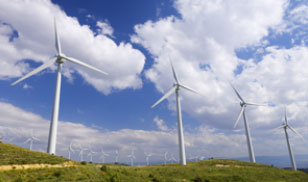 CLEAN AND RENEWABLE: Nestlé Mexico is obtaining 85% of its electrical energy needs from wind power.

Nestlé has topped a list of global companies in efforts to disclose and cut carbon emissions. CLEAN AND RENEWABLE: Nestlé Mexico is obtaining 85% of its electrical energy needs from wind power.

The Carbon Disclosure Project, an independent non-profit organisation, released its annual ranking based on data requested from the ‘Global 500’ companies.

It measured companies on a range of factors including how they incorporated climate change into their business plans, how they monitored emissions, their transparency, and actions they were taking to mitigate their impact.

“Since 2001 we have halved the greenhouse gas emissions from our factories per tonne of product.

“We are committed to reducing emissions from our operations even further by continuing to improve energy efficiency, to switch to cleaner fuels and to invest in renewable sources,” he added.

Leading the food industry in Mexico

The Carbon Disclosure Project ranking was released in the same week as Nestlé announced its latest achievement in cutting greenhouse gas emissions, in Mexico.

The company has become the first food company in the country to obtain nearly all the electrical energy needed for its manufacturing operations from a renewable source.

Nestlé is receiving 85% of the total electricity required by its factories from one of the largest wind farms in Mexico.

This will reduce the amount of CO2 released into the atmosphere by more than 124,000 tonnes a year, the equivalent of taking 39,000 small cars off the road annually.

The ‘Bii Nee Stipa II wind farm, which means ‘the wind that brings power’ in local dialect, is located in the La Ventosa region in the state of Oaxaca.

“We’re proud to announce that the target we set ourselves last year has become a reality,” said Marcelo Melchior, Chief Executive Officer of Nestlé Mexico.

“Now, 85% of our electrical energy requirements come from a clean and renewable source. We feel certain that more businesses will join us in investing in the long-term, sustainable future of Mexican industry.”

Mr Melchior made the announcement at the offices of Mexico’s Ministry for the Economy.