Researchers have found that a daily serving of nuts could help to control weight in adults, and could lead to a healthier life… 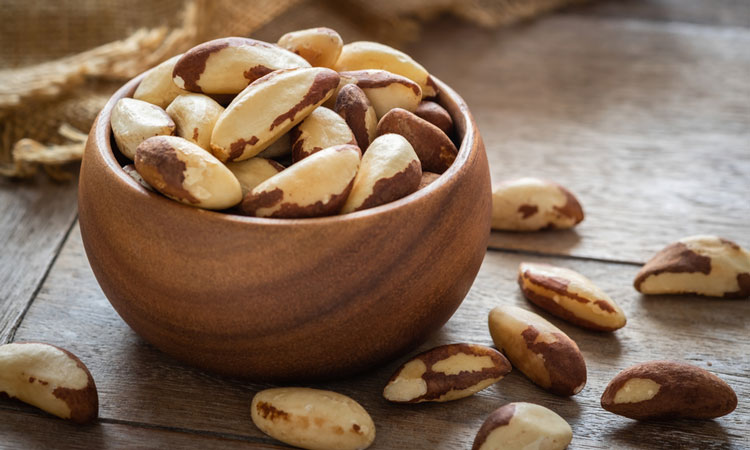 Eating Brazil nuts and other varieties of nuts daily may prevent weight gain and provide other cardiovascular benefits, according to two separate preliminary studies to be presented at the American Heart Association’s Scientific Sessions 2018 in Chicago, a premier global exchange of the latest advances in cardiovascular science for researchers and clinicians.

One study analysed the influence of eating nuts and peanuts on long-term body weight in U.S. men and women. The other study examined whether eating Brazil nuts could increases a sense of fullness and improve glucose and insulin responses.

In the analysis of nuts’ impact on weight, researchers followed health professionals who were free of chronic disease at the start of the study. They found that eating a one one-ounce serving of any type of nuts or peanuts, in place of foods generally considered low in nutritional value, was associated with a lower risk of long-term weight gain and obesity.

A serving of nuts is defined as one ounce of whole nuts or two tablespoons of nut butter. “People often see nuts as food items high in fat and calories, so they hesitate to consider them as healthy snacks, but they are in fact associated with less weight gain and wellness,” said Dr Xiaoran Liu, first author of the study and a research associate in the nutrition department of Harvard School of Public Health in Boston, Massachusetts.

“Once people reach adulthood, they start to gradually gain about one pound a year of weight, which seems small. But if you consider gaining one pound over 20 years, it accumulates to a lot of weight gain,” she said. “Adding one ounce of nuts to your diet in place of less healthy foods – such as red or processed meat, French fries or sugary snacks – may help prevent that slow, gradual weight gain after you enter adulthood and reduce the risk of obesity-related cardiovascular diseases.”

Participants in the research on the influence of nuts on weight gain were mainly white and part of the health profession, but researchers believe even with this limitation the findings can be applied to a general population.

In the Brazil nut study, conducted at San Diego State University in 2017 through a grant from the American Heart Association, 22 healthy adults (20 women and two men) age 20 or older with a mean body mass index of 22.3, consumed either 36 grams of pretzels or 20 grams of Brazil nuts (about five nuts) in addition to their usual diet. The Brazil nuts and pretzels had approximately the same amount of calories and sodium. Participants ate either the nuts or the pretzels in two trials with a washout period of at least 48 hours to prevent carryover effects.

“While both Brazil nuts and pretzels increased a sense of fullness after they were eaten, eating Brazil nuts stabilized postprandial (after eating) blood glucose and insulin levels, which may be beneficial in preventing diabetes and weight gain,” said Dr Mee Young Hong, senior author of the study and Professor in the School of Exercise & Nutritional Sciences at San Diego State University in San Diego, California.

Brazil nuts are one of the highest known food sources of selenium, a mineral which the researchers note in previous studies may be associated with improvements in insulin and glucose responses. Insulin is produced in the pancreas and is a catalyst for processing glucose into energy. Some people are insulin resistant or don’t produce enough insulin, which means glucose can reach unhealthy levels and result in diabetes, a major risk factor for heart attacks and strokes.

“Our study allows researchers and clinicians to consider the possible beneficial role of Brazil nuts to help people feel full and maintain a healthy level of glucose, reducing the risk of obesity and diabetes,” Hong said.

In the Brazil nut study, only 9 per cent of the participants were men, so the findings should not be generalised to a male population according to Dr Hong.