As well as expanding its operations, the new facility allows Lindt to capitalise on the company’s strong growth in the Australian market… 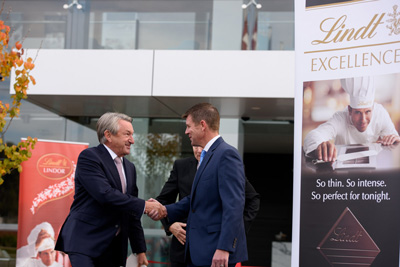 As well as expanding its operations, the new facility allows Lindt to capitalise on the company’s strong growth in the Australian market.

Lindt & Sprüngli’s Group CEO Ernst Tanner said that the company’s decision to enter the Australian market nearly twenty years ago has proven to be one of the most successful ventures in the company’s history.

“Never did we anticipate the reception that Lindt chocolates would receive in Australia when we first entered the market here. I am delighted that the growth of our business in Australia has allowed us to not only expand our operations but to provide people in Sydney’s West with employment opportunities with Lindt”, said Mr Tanner.

The purpose-built facility covers a 66,000 square metre site, with over 25,000 square metres of factory and warehouse space, and forms part of the $2.9 billion investment in the Sydney Business Park which will host a range of retail and recreational businesses.

This month the new factory began spinning a new range of Lindt Easter eggs which will be available to the public in Easter 2017 using chocolate imported from Switzerland.

“The fact that we are spinning a new product specifically for the Australian public is a reflection on the many successes we have had here. The team at Lindt Australia is eager to share the new Easter egg and we know that Australia will love it as much as we do,” said Mr Tanner.