Sales of wet and dry baby food have dropped by 14%, says Mintel

Posted: 3 May 2016 | Victoria White, Digital Content Producer | No comments yet 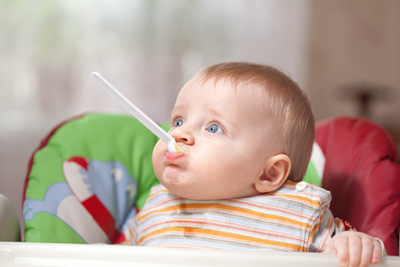 New research from Mintel reveals UK sales of wet and dry baby food dropped by 14% between 2012 and 2015 as currently many parents choose to blend up a treat for their tiny tots. According to the research, today, over four in five parents with children aged four and under say they feed their child homemade food (excluding snacks) such as purées made from scratch, with as many as 12% saying they do this four times a day or more. And while peeling, chopping and puréeing is clearly no mean feat, with less than two in five parents saying that homemade baby food is easy to prepare, it seems many are in agreement over the benefits of homemade food.

Mintel research shows that managing children’s diet is crucial as 45% of parents cite control of ingredients as a reason for making baby food at home. And it seems Britain’s parents appreciate the cost-saving element of homemade food as more than a third see baby/toddler pouches as an expensive option. What’s more, for one in seven parents, homemade food is seen to as ‘premium’, compared to 6% who say this of manufactured baby food products in jars.

Overall volume sales of baby food, drink and milk are estimated to have fallen by 3% since 2012 from 99 million kg to 96 million kg in 2015. During 2016 the market is forecast to decline further, falling to 95 million kg.

Amy Price, Senior Food and Drink Analyst at Mintel, commented on the research: “While for many busy parents preparing the family meal may feel like a chore, our research shows that the majority of parents are happy to cook for their tots. An on-going focus on sugar as a health foe means that, for many parents, control of baby’s diet is crucial, which helps to explain why so many parents are choosing to feed their babies and toddlers homemade fayre. As a result, the popularity of homemade food poses a threat to the baby food and drink market. That homemade food is seen to be more premium than manufactured indicates that manufacturers need to step up and premium sub-brands could be one way to explore this.”

Manufactured baby food still has a role to play

When it comes to which products they choose to buy, trust is the leading factor in purchase decision. Over one third of parents with children aged 0-4 say that the last time they bought manufactured baby or toddler food they chose a brand they trusted, followed by a product with no added sugar and a product which contained 1 of 5-a-day portions of fruit or vegetables. When buying baby and toddler milk, brand is also an important factor as 34% of parents with children aged four and under say that the last time they bought baby milk the brand of the product was important.

However, it seems that parents are not afraid to step away from food products specifically targeted towards their little ones: one in five parents with children aged 4 and under say that they buy child-friendly versions of regular food, such as low-salt baked-beans and full-fat yogurt, instead of manufactured baby or toddler food.