Researchers have manipulated the metabolic properties of yoghurt-producing bacteria to sweeten yoghurt naturally, while reducing sugar in the final product… 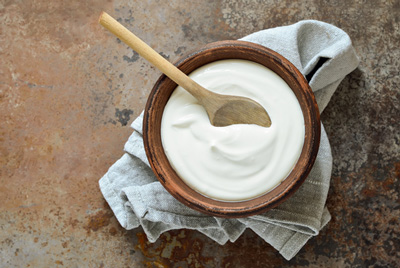 Researchers have manipulated the metabolic properties of yoghurt-producing bacteria to sweeten the yoghurt naturally, while reducing sugar in the final product. Similar manipulations have also all but eliminated lactose, so that those with lactose intolerance can enjoy the yoghurt. The researchers have accomplished all of this using microbiological methods that predate the era of genetic technologies.

The goal was to engineer the yoghurt bacteria not to consume glucose, a fermentation product that is a particularly sweet form of sugar, said Eric Johansen, PhD. Johansen is Associate Vice President – Science, Chr. Hansen, A/S, Hørsholm, Denmark.

In certain countries, including Denmark, yoghurt is defined as containing live cultures of Streptococcus thermophilus and Lactobacillus delbrueckii subsp bulgaricus. Normally, when grown in milk, the two bacterial species break down lactose, a disaccharide, into its monosaccharide components, glucose, and galactose. They consume the glucose and secrete the galactose.

“We wanted to change them so that they would eat the galactose and spit out the glucose,” said Johansen. “That required a number of changes in metabolism.”

The next steps were to modify the bacteria so that they would no longer consume glucose, and would no longer even transport glucose into the cell. To this end, Johansen’s team grew the bacteria in a medium containing a glucose analogue called 2-deoxyglucose, which is toxic to cells. The few mutants that survived in this medium lacked the ability to metabolise glucose. A second round of selection, with higher levels of 2-deoxyglucose, resulted in survival of mutants lacking the glucose transport mechanism.

The researchers also used 2-deoxyglucose to isolate mutants of Lactobacillus bulgaricus, to select for mutants that were unable to transport glucose into the cell. This prevented them from consuming the glucose produced by S. thermophilus.

Now they made yoghurt with the modified bacteria. The yoghurt had very little lactose, and not much galactose. But it was high in glucose – and sweet. They presented the yoghurt to a taste panel, with varying amounts of sucrose added, but in all cases with less than is normally added to yoghurt. The results: they were able to reduce added sucrose by 20 percent while maintaining the desired sweetness.