New research suggests that prunetin, a compound found in butter beans (also known as lima beans) may have beneficial effects in males… 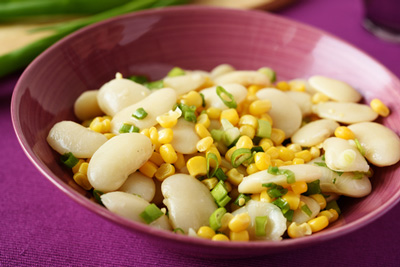 New research suggests that prunetin, a compound found in butter beans (also known as lima beans) may have beneficial effects in males. The report shows that administering an oral dose of prunetin to male fruit flies extends lifespan, increases fitness levels, and improves their glucose balance. This effect was not found in females.

“Our study provides novel insights into plant bioactive research and suggests a potential to combat aging comparatively simple by the intake of a plant bioactive,” said Anika E. Wagner, Ph.D., a researcher involved in the work from the Institute of Human Nutrition and Food Science at Christian-Albrechts-University Kiel, in Kiel, Germany. “Further studies in mammalian species/humans are needed to validate initial data which were generated in the model organism Drosophila melanogaster.”

To make their discovery, scientists separated fruit flies according to sex prior to the start of the experimental treatment to compare prunetin-mediated effects on both males and females. The flies were then chronically administered either a prunetin-containing diet or a prunetin-free control diet. The flies were monitored every other day, and dead flies were counted. The researchers found that prunetin-fed male flies lived longer than those receiving the control diet. To evaluate their health state / fitness, the flies were coerced to climb up in a transparent tube and the distance which they could overcome in a defined time period was calculated.

“This research shows that the connection between diet and health is important for all living animals, no matter how complex or how simple they are,” said Thoru Pederson, Ph.D., Editor-in-Chief of The FASEB Journal. “There is a lot of work that must be done before we would know if this compound will be useful to humans, but it certainly doesn’t hurt to add butter beans to more men’s diets.”