Waitrose’s new pledge sets a minimum standard for its British dairy farmers, requiring them to graze their herds outside for at least 100 days a year… 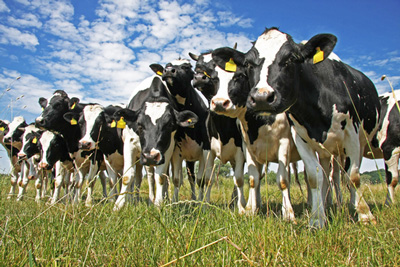 Waitrose’s new 100 day grazing pledge sets a minimum standard for its British dairy farmers, requiring them to graze their herds outside for at least 100 days a year. The pledge strengthens the company’s commitment to animal welfare and ensuring a level of consistency across its dairy farms.

Waitrose conventional milk is produced from cows bred specifically for milk production, typically British Friesian and Holstein Friesian. The milk is produced exclusively for the supermarket by a pool of 50 dairy farms in Oxfordshire, Gloucestershire, Buckinghamshire, Wiltshire, Berkshire, Dorset, Somerset and Devon. The dairy cattle graze on pastures through the summer and during winter they are housed in well-ventilated barns with clean, dry and comfortable bedding and fed on a forage-based diet of grass or maize silage.

Heather Jenkins, Waitrose Director of Agriculture and Meat, Fish and Dairy Buying said: “We’ve always required our farmers to graze their dairy herds outside but this move puts in place a minimum benchmark of at least 100 days a year. We’re proud of our commitment and proud of our dairy farmers for the support they have given us with this move to a formal standard.

“Getting dairy cows outside and on grass pasture whenever possible not only produces great quality milk but is a key aspect of good animal welfare, something we believe is of the utmost importance.”

Brian Barnett, Chair of the Waitrose Dairy Farmers Group, said:  “As farmers supplying milk to Waitrose we have always been required to graze their dairy cattle, so having pasture land and suitable buildings to make this possible is embedded in our on-farm planning.

“Now, with Waitrose, we have agreed a minimum standard to demonstrate our shared commitment to ensuring that our dairy cows are able to enjoy outside pasture for at least 100 days a year.

“The Waitrose milk producer group has been working closely with Waitrose for many years and over this time we have developed a producer scheme which reflects the Waitrose values and those of the Waitrose customer. Grazing cattle has always been important to us and we are pleased to be able to embed this requirement as a benchmark for our milk supply group.”

Today’s pledge builds on Waitrose’s strong record in animal welfare which most recently saw it confirmed as a Tier One leader in the global Business Benchmark on Farm Animal Welfare for the second year running. The supermarket also won Compassion in World Farming’s Good Dairy Award in 2011 and the CiWF Retailer of the Year award for the sixth time in 2015.