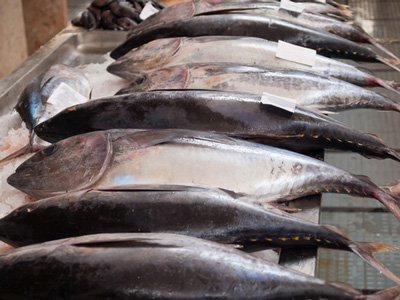 A global analysis of seafood, carried out by researchers at Scripps Institution of Oceanography at UC San Diego, has found that fish populations throughout the world’s oceans are contaminated with industrial and agricultural pollutants, collectively known as persistent organic pollutants (POPs). On a positive note, the study also found concentrations of these pollutants have been consistently dropping over the last 30 years.

The findings were based on an analysis of hundreds of peer-reviewed articles from 1969-2012. The pollutants studied included older ‘legacy’ chemicals, such as DDT and mercury, as well as newer industrial chemicals, such as flame retardants and coolants.

“Based on the best data collected from across the globe, we can say that POPs can be anywhere and in any species of marine fish,” said Scripps biologist Stuart Sandin.

Concentrations of POPs were higher in the 1980s

Although POPs were found in fish in all of the world’s oceans, the researchers say that concentrations in the consumable meat of marine fish are highly variable, where one region or group of fish may find concentrations of POPs that vary by 1,000-fold. The analysis revealed that average concentrations of each class of POP were significantly higher in the 1980s than is found today, with a drop in concentration of 15-30 percent per decade.

“This means that the typical fish that you consume today can have approximately 50 percent of the concentration of most POPs when compared to the same fish eaten by your parents at your age,” said Scripps researchers Lindsay Bonito.  “But there still remains a chance of getting a fillet as contaminated as what your parents ate.”

The researchers also compared the results to federal safety guidelines for seafood consumption and found that the average levels of contaminants were at or below the health standards set by the US Environmental Protection Agency (EPA). Mercury and PCBs (polychlorinated biphenyl) concentrations were at the EPA threshold for occasional human consumption, while concentrations of DDT were consistently much lower than the established threshold.

According to the researchers, these results suggest that the global community has responded to the calls-to-action, such as in the Stockholm Convention, to limit the release of potentially harmful chemicals into the environment. However, they caution that although pollutant concentrations in marine fish are steadily declining, they still remain quite high, and that understanding the cumulative effects of numerous exposures to pollutants in seafood is necessary to determine the specific risk to consumers.