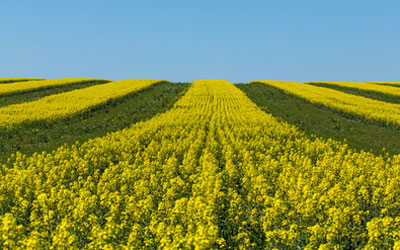 Cargill celebrated the opening of its newest investment in Alberta – a state-of-the-art canola (rapeseed) processing facility in Camrose – alongside Alberta farmers, industry stakeholders and dignitaries.

“We are very excited to mark the official opening of our newest state-of-the-art canola crush facility in Canada. This plant has the capacity to process over 1 million metric tonnes of canola per year and will provide Alberta canola growers with a competitive point of delivery in this region,” said Ken Stone, Assistant Vice President for Cargill’s Canadian canola processing business.

The new Cargill canola processing facility is the first major investment in Alberta’s grains and oilseed sector in 30 years and further diversifies Alberta’s agriculture sector and competitiveness in the global marketplace.

Global demand for canola on the rise

“The global demand for canola is on the rise, and we’re targeting an increase to 26 million metric tonnes by the year 2025,” says Patti Miller, president of the Canola Council of Canada. “More than half of this will be processed in Canada for markets around the world. Cargill’s new plant takes us a step closer to achieving this goal.”

Cargill operates eight businesses in Alberta across 22 locations with over 3,000 employees. With 34% of our Canadian investment in the province, we continue to increase our footprint with new builds, expansions, and upgrades to existing infrastructure. Throughout construction, approximately 1 million hours of employment were created in addition to 60 new permanent positions in Camrose.

This crush facility will also place Alberta’s canola sector at a competitive advantage in the global marketplace as markets become available through the proposed Trans Pacific Partnership.