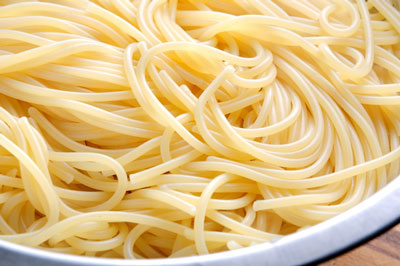 The study provides new information for research into gluten sensitivity.

The research is in vitro and the authors of the study, from the University of Milan, Italy, say that more research is needed to determine what biological effect these molecules have on the body once they pass into the bloodstream.

“Previous lab tests have been done on pure gluten, but for the first time we have simulated digestion using real bread and pasta bought from the supermarket to see if these molecules are produced,” said Dr Milda Stuknytė, one of the authors of the study. “We show that not only are these molecules produced during digestion, but they can also pass through the gut lining, suggesting that they could indeed have a biological effect.”

The wheat proteins and molecules produced during digestion are involved in causing gluten intolerance and sensitivity, which has led to bread and pasta becoming the focus of many popular diets. An estimated 1% of the population suffers with celiac disease or wheat allergy. Non-coeliac gluten sensitivity affects around six times more people than coeliac disease, yet relatively little is known about the mechanisms that cause it.

The molecules produced during gluten digestion include exorphins, which have also been found in the spinal fluid of people with schizophrenia and autism, and are thought to worsen the symptoms of these neurological diseases. They are similar to opioid molecules, so it’s possible they could have a drug-like effect on the brain.

“We chose to study bread and pasta because they represent such a significant part of our diet, especially in Italy,” said Dr Stuknytė. “While we know quite a lot about the mechanisms of celiac disease and how it’s connected to gluten, we still know relatively little about non-ceoliac gluten sensitivity. It’s just as important, and our research provides further insight into the proteins and the derived peptides that could be involved.”

The researchers bought two kinds of sliced bread and four kinds of dried spaghetti to digest, from a commercial market. They cooked the spaghetti according to manufacturers’ guidelines, and then digested each sample using a simulated digestion system in the lab.

The levels of the two molecules following digestion were quite different, with twice as much C5 being produced compared to A5; up to 1 milligram of C5 was produced from the in vitro digestion of a single serving size of pasta.

“We were surprised to find such a high amount of C5 in some of the pasta samples,” said Dr Stuknytė, “We still don’t know what effect this amount could have, but it’s plausible that it could have a potential opioid effect in humans.”

The researchers now plan to investigate what happens to the molecules as they are transported through the digestive system, from the intestine into the blood.

The study results are published in the journal Food Research International.