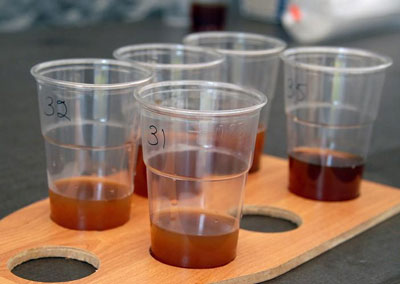 A group of experts from the VTT Technical Research Centre of Finland have characterised sahti beer for the first time. The sweet and strong sahti has been brewed in Finland for hundreds of years.

“Understanding the properties of sahti gives us an insight into how beers have evolved in the last 1000 years. There is a global revival of interest in classic beer styles and many rather obscure ones are being recreated by craft brewers”, explained Brian Gibson from VTT Technical Research Centre of Finland.

To successfully recreate sahti-style beer, a craft brewer outside Finland should have an idea of what it should taste like. This is complicated by the fact that sahti doesn’t travel well: it’s prone to spoilage. This study is therefore a useful reference point.

The study clearly shows that sahti beer differs from modern commercial beers in almost every respect.

The twelve beers sampled were all very strong, very sweet and had flavours at concentrations as much as 10-fold greater than in the modern beers used as references. The bitterness levels were very low due to the absence of hops but they had an intense fruity flavour. For example, a compound imparting banana aroma was exceptionally high. The average alcohol level of the 12 samples was 8 %.

The high sugar content is one of the reasons for the short shelf life. It also indirectly affects properties such as foam production: sahti, like some English ales has little or no foam.

Sahti, uniquely, is flavoured with juniper and therefore contains flavours that don’t exist in other beers. It is fermented with the help of baker’s yeast rather than brewer’s yeast, which adds a phenolic, clove-like taste. This property is usually only found in wheat beers.

“The collection of samples in the study was relatively small and therefore regional differences in sahti characteristics are not easy to detect. However, according to sahti brewers there are clear differences throughout the country. There is certainly scope for further investigation”, says Gibson.

Sahti is protected by Traditional Speciality Guaranteed label by EU, implying that commercial use of the name is restricted to sahti beer produced according to the traditional, registered production method.