Maris Otter is celebrating its 50th anniversary this year and festivities are likely to be very jolly, given that it is used for making craft beers… 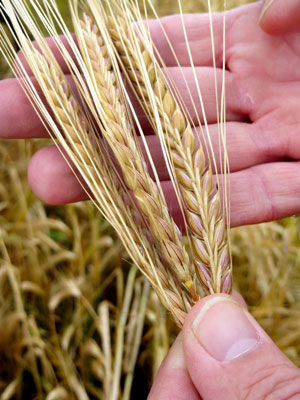 Maris Otter, a low-nitrogen winter barley, is celebrating its 50th anniversary this year. The festivities are likely to be very jolly, given that the breed in question is used for making some of the UK’s best loved craft beers.

Spanning its extraordinary 50 year history is a tale of domination, decline, rescue and revival. Cross-bred from Proctor and Pioneer in 1965 by the Plant Breeding Institute in Cambridge, its popularity grew quickly and it dominated the market throughout the 1970s. However, by the late 80s it had fallen out of favour with many of the larger breweries .

Despite this, a number of brewers remained loyal to Maris Otter. They said the malt it produced performed excellently in the mash tun, and the resulting beers had a depth of flavour unmatched by those made with other malts. This commitment from a small group of brewers encouraged grain merchants H Banham and Robin Appel in their quest to save the variety. Between them, in 1992, the merchants bought the rights to it – and they are still the sole owners.

While Maris Otter might not be a household name, it is legendary among a group of craft brewers and beer-lovers. Once malted, it becomes the ingredient by which loyalist brewers swear.  In fact, although the proportion of British beer produced with Maris Otter malt is less than 6%, a colossal nine of the most recent fourteen Champion Beers of Britain are made with Maris Otter. Quite a record for an ingredient. Most cereal varieties are superseded within five or six years. 50 years’ continual production is truly exceptional. It is, as Mark Banham from grain merchants H Banham points out, “well worth commemorating”. So he has joined forces with David Holliday from Norfolk Brewhouse to create a commemorative beer festival.

50 brand new beers are being created for the Maris Otter 50th anniversary festival in Norwich, 17th – 19th September. They are being crafted by brewers from 44 different counties of Britain and 6 countries from across the world. “This is the first beer festival to have all 50 of its beers brewed especially for the occasion.” says Mark, “As far as we know, it’s also the first birthday party ever to be held for a grain variety!

“Brewers from far and wide have been asking how to get involved. Limitations of space mean we’re sticking to 50 cask beers for the Festival. But brewers can create celebrations in their own home towns, using their Maris Otter beers to toast the 50th harvest of the amazing barley grain. We look forward to hearing about any birthday plans they make!”

To find out more about the festival, please visit www.h-banham.co.uk.