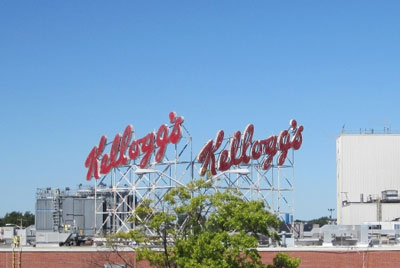 First quarter 2015 reported net sales for Kellogg Company decreased by 5.0% to $3.6 billion, primarily due to the effect of currency translation.  Currency-neutral comparable net sales decreased by 0.3% over the same period; this result included growth in each of the international regions.  First quarter 2015 reported operating profit was $384 million, a decline of 37.5%; this decrease was driven primarily by the impact that asset returns and changes in interest rates had on pension plans.  The decline in currency-neutral comparable operating profit was largely the result of slightly lower net sales.

Comparable first quarter 2015 earnings were $0.98 per share, greater than the Kellogg Company’s expectations

Reported earnings for the first quarter of 2015 were $227 million, or $0.64 per share, a decrease of 43% from the $1.12 per share reported in the first quarter of last year.  Earning per share included negative impacts from mark-to-market of $0.13 per share and costs associated with the Project K efficiency and effectiveness program of $0.13 per share.  In addition, reported results included $0.01 per share of integration costs related to the acquisition of Pringles and Bisco Misr and $0.07 of other costs.  Excluding these items, comparable first quarter 2015 earnings were $0.98 per share, greater than the Kellogg Company’s expectations.  This result included a negative impact of $0.06 per share from currency translation; comparable earnings per share excluding the impact of currencies would have been $1.04 per share.

“We were pleased to report improved sales trends in the first quarter.  In fact, our results exceeded our expectations and we are on-track for the year,” said John Bryant, Kellogg Company’s chairman and chief executive officer.  “We’ve made great progress with Project K and are reinvesting to drive profitable sales growth.”

Net sales posted by Kellogg North America were $2.4 billion in the first quarter, a reported decrease of 3.7%; currency-neutral comparable net sales decreased by 2.8%.