Research has found that the interaction of roots with mycorrhizal fungus changes the genetic expression of rice crops, triggering additional root growth… 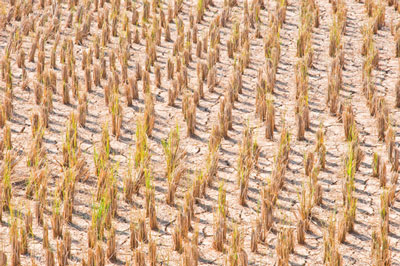 New research has found that the interaction of roots with a common soil fungus changes the genetic expression of rice crops – triggering additional root growth that enables the plant to absorb more nutrients. In addition to causing extra root growth, the mycorrhizal fungus also enmeshes itself within crop roots at a cellular level — blooming within individual plant cells. The fungus grows thin tendrils called hyphae that extend into surrounding soil and pump nutrients, phosphate in particular, straight into the heart of plant cells.

Plants ‘colonised’ by the fungi get between 70 to 100% of their phosphate directly from these fungus tendrils, an enormous mineral boost which may eventually mitigate the need for farmers to saturate crop fields with phosphate fertiliser to ensure maximum yield.

The hope is that mycorrhizal fungi could one day act as a ‘bio-fertiliser’ that ultimately replaces the need to mine phosphate from the ground for industrial fertiliser. Finding a replacement for mined phosphate is a critical problem as not only is the resultant fertiliser a pollutant — causing algal growth which chokes water supplies — but the big phosphate mines are now depleted to the point where they are expected to run out in the next 30 to 50 years. Many experts are predicting a ‘phosphate crisis’.

“The big question we are trying to answer is whether and how we can make use of the biofertiliser capacity of mycorrhizal symbiosis in modern and more high input agricultural settings, meaning more intensive farming methods. We need alternatives to phosphate fertiliser if we are to feed growing populations,” said Dr Uta Paszkowski from the University of Cambridge‘s Department of Plant Sciences, who co-authored the research published in the journal PNAS.

“Cereals such as rice, wheat and maize are the most important crops in the world, feeding billions of people every day. Mycorrhizal fungi have a mutualistic relationship with plants, including cereals, going back to the earliest days of plant life on land, before roots were ‘invented’. By analysing this ancient and common relationship we are gaining insights that could be used to breed crops with the best possible root architectural and symbiotic properties — towards ‘designing crops’ with very high food outputs,” she said.

The new research pioneers the examination of the root system building units of adult rice plants at a molecular level, as rice can be used as a model for cereal crops generally. Cereal root ‘architecture’ involves a few big, thickset roots called crown roots that act as a scaffold from which all the smaller, lateral roots spread out into the different layers of soil, which contain the various nutrients.

Mycorrhizal fungi cause cells walls within crown roots to soften, triggering the growth of more lateral roots which suck up nutrients

Researchers found that plants colonised by mycorrhizal fungi have a different genetic expression which causes the cell walls within crown roots to soften, triggering the growth of many more lateral roots which are able to suck in more nutrients, contributing to a healthier plant with a higher yield. This is in addition to the phosphate provided by the fungal ‘hyphae’ tendrils, which in effect act as extra roots themselves (in return for which, the fungus gets its carbohydrate from the plant).

“Plant roots that have the capacity to explore the widest soil area absorb the most nutrients as a consequence and so are likely to have a greater crop yield. By finding out which parts of the genome are responsible for the best plant root systems we can start breeding for the best root ‘architecture’,” said Paszkowski.

Rice is best grown in highly irrigated paddy fields, but there are many parts of the world where this is not an option, and 40% of the world’s area for rice crop is grown ‘dry’. However, the plant-fungi relationship that creates enhanced crops actually works best in dry environments. Mycorrhizal fungi could be of huge benefit to those who rely on dry rice crops in some of the poorest areas of Asia and sub-Saharan Africa.

The main hurdle for researchers to overcome is the self-regulation of plants, which means the fungi cannot be tested on an industrial scale alongside traditional fertiliser.

“Plants monitor their own nutritional state. If a plant has enough phosphate it will not allow fungus to enter root – so at the moment it’s one or the other. We are working on ways to circumvent this blockage so we can allow symbiosis to contribute in agricultural practices in better developed countries,” said Paszkowski.

Mycorrhizal fungi are extremely common in all soils around the world, and are an ingredient in many ‘bio’ plant foods found in domestic garden centres, but have yet to be used for industrial agriculture.