Posted: 3 December 2014 | The Barry Callebaut Group | No comments yet 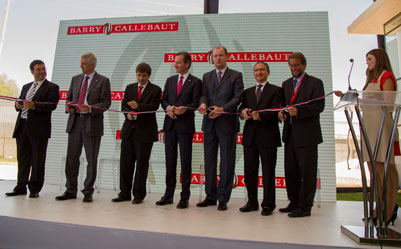 The Barry Callebaut Group, the world’s leading manufacturer of high-quality chocolate and cocoa products, today officially inaugurated its first chocolate factory in Chile. The state-of-the-art facility in Paine, located approximately 40 km from the capital city of Santiago de Chile, has an initial annual production capacity of around 25,000 tonnes of liquid chocolate and compound.

Paine was chosen as the site of the new factory due to its proximity to Santiago’s central economic district and geographic accessibility to existing and potential customers in Chile and adjacent countries. The factory will serve as a regional base for Barry Callebaut to tap into the rapidly-growing Chilean chocolate market while capturing new opportunities in the broader Andean region.

“The inauguration of our new factory in Chile further confirms our commitment to serving customers throughout Latin America,” said Juergen Steinemann, CEO of the Barry Callebaut Group. “As the global popularity of chocolate continues to grow, our focus remains on expanding into emerging markets to better serve our customer being food manufacturers and confectionery companies. Chile is an attractive market for growth, as do neighboring countries like Argentina, Uruguay, Paraguay and Peru.”

Speaking at a press conference prior to the inauguration ceremony, Gerardo Elizondo, the Barry Callebaut Group’s General Manager for the Andean Region added, “There is a significant growth momentum of the Chilean chocolate market compared to other Latin American markets. The growth potential includes a fast-growing demand for high-quality chocolate, technical services and innovations. That’s where we can offer added-value to our customers.”

With a yearly chocolate consumption of 2.2 kg per capita, Chile is among the top markets in Latin America. Currently, the total annual volume of chocolate confectionery products consumed in the Chilean market sums up to 40,000 tonnes. The market is expected to grow by nearly 3.5% per annum in volume until 2019 (+7.0% in value) – much higher than the long-term average annual volume growth rate of the global chocolate market of 2.0%.1

The new factory in Paine, Santiago de Chile, is Barry Callebaut’s first chocolate factory in the Andean Region. It will also serve as a regional sales and management headquarters.

By The Barry Callebaut Group