Tomas Pietrangeli has been named the new head of Arla Denmark… 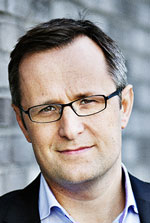 Tomas Pietrangeli has been named the new head of Arla Denmark. Coming from a job as Managing Director at Reckitt Benckiser, he will start his new role in Arla later this year. ”Tomas brings some exciting skills with him into his new role, which I look forward to seeing him unfold as he carries on the solid work that our Danish business delivers,” says Arla CEO Peder Tuborgh.

When Peter Giørtz-Carlsen recently left his position as head of Arla Denmark and took on the role as head of Arla UK, Arla’s executive management group took the opportunity to review the future leadership setup for all three Nordic core markets – Sweden, Denmark, Finland.

Head of Arla Sweden, Executive Vice President Henri de Sauvage, will remain head of Arla Sweden based in Stockholm, but will represent all three Nordic core markets in the executive management group as of 2015.